Grab some out-of-this-world starfury armour this weekend on Treasure Hunter.

From 00:00 UTC on 10th September until 23:59 UTC on 15th September, gather items to craft and upgrade three sets of armour – one for each combat style - from Treasure Hunter, mining or trade.

They can be improved up to level 70, they don't degrade, and – of course – they look pretty darn spectacular: 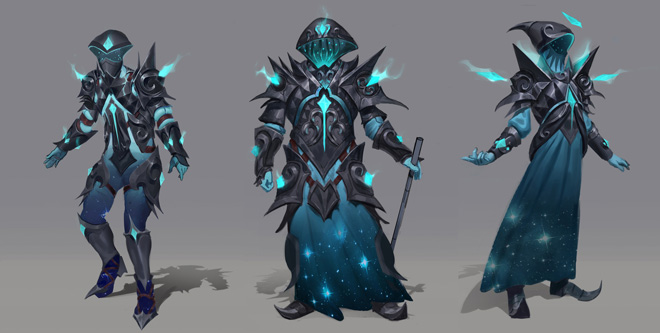 Starfury weapons can also be obtained, if you missed them when they last appeared.

Read on for more details, and start bedecking yourself in firmament-shaming finery.

How to Get Starfury Armour

First up, you'll need starlight ore. This can be won on Treasure Hunter, obtained by mining regular rocks (not the Shooting Star D&D) and traded on the Grand Exchange or directly between players.

Click on the ore to create starfire armour or weapons. Each of the three armour sets has six pieces, and all starfire gear can be switched between level 1 and level 40 stats. Each one you create grants you Smithing XP equivalent to the ore spent.

The ability to craft the armour unlocks gradually as the six days go by. Weapons can all be crafted from the start:

Note that all days start at 00:00 UTC (game time) and that each item can be crafted from date of unlock until the ore is removed after 28th September.

If you prefer, you can exchange starlight ore directly for Smithing or Mining XP – up to 10,000 pieces per day. To do so, speak to Ivar in the Artisans' Workshop.

You can also collect starborn diamonds via the same methods as the ore (although they're much rarer), or by converting starlight ore. They're used to upgrade your starfire gear to the improved starfury versions. To do so, use a starborn diamond on the item to be upgraded.

This confers a range of benefits:

Have fun collecting and upgrading your armour, and let us know your feedback over on the forums.

This was a Vine video, but is no longer available.

Treasure Hunter[help] is a minigame – playable from within RuneScape - where players use Keys[help] to claim in-game items as prizes. These range from useful resources to rare weapons and exclusive gear.

Playing Treasure Hunter is simple – click the treasure chest icon that pops up when you log in. If you've not played before, just follow the on-screen guide.

Everyone gets at least one Key per day, and RuneScape members get two. You can earn more Keys while playing the game[help], or stock up by redeeming Bonds.

If you'd like more, you can also buy Keys on the website, or by clicking 'Buy Keys' within the Treasure Hunter interface in-game.
Retrieved from "https://runescape.fandom.com/wiki/Update:Treasure_Hunter_%E2%80%93_Starfury_Armour?oldid=14734956"
Community content is available under CC-BY-SA unless otherwise noted.