The TzHaar City is in crisis. For a reason unknown to the TzHaar-Mej, the eggs in the Birthing Pool are hatching into Ga’al: TzHaar without the inborn memories they need to perform their traditional caste roles.

In our latest Master Level quest, you’ll travel with one of these Ga’al to the forgotten depths of the TzHaar volcano, in search of a way to grant him the memories he needs to become accepted within TzHaar society. You’ll meet the mysterious TokHaar, and unearth secrets surrounding the origin of the TzHaar race – secrets which may change the course of their civilisation forever.

Where to start The Elder Kiln:

Speak to TzHaar-Mej-Jeh by the Birthing Pools in the TzHaar City. 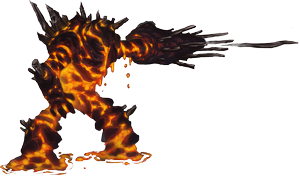 Rewards for this quest include great slabs of XP, a ring that increases damage against the inhabitants of the TzHaar City, and a new title.

For combat fans, perhaps the most exciting reward is the opportunity to enter The Fight Kiln, our brutal new combat minigame, upon completion of the quest and the sacrifice of a fire cape. While the wave-based solo combat format will be familiar to veterans of the Fight Caves, this is a whole different beast. Temporary power-up crystals will drop during the course of the battle, and these will be a vital part of your survival strategy. It’ll take every iota of your fighting prowess and tactical cunning to endure the relentless onslaught of the TokHaar, before awakening the final boss from its subterranean slumber.

Should you prevail, you’ll win the right to wear the TokHaar-Kal – the only cape in RuneScape with a +8 strength bonus! 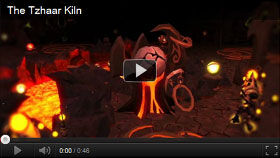 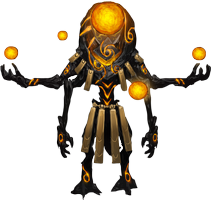 Before setting off on your journey to The Elder Kiln, be sure to take a tour of the TzHaar City. With a new quest and combat minigame, we felt that it was high time that this unique race received a facelift. We’ve completely reworked the environment of the city, replacing the bright orange crazing with detailed caverns and rock formations, moodily lit with smouldering glyphs and bubbling pools of lava. We’ve made huge changes to the NPC models, too. Each caste is now highly distinct, from the lumbering TzHaar-Ket to the gaunt TzHaar-Mej, and each has new animations to go along with their updated graphics. What’s more, all inhabitants of the Fight Caves, including the mighty TzTok-Jad, have received a lick of paint, and all player-wielded gear (with the exception of the fire cape) has been updated to bring it in line with the style of the rework. Finally, be sure to listen out for the eerie strains of ambient music fading in and out over the deep rumble of the volcano, as well as some truly tense and brooding battle music, as our audio team have really gone to town.

- The Elder Kiln will feature the first Early Bird Bonus. If you complete the quest within two weeks of release (before the 29th of February) you'll receive twice the quest XP reward you normally would - so, you'll receive a tome that imparts an extra 50,000 Magic and 30,000 Agility XP, and an extra 100,000 XP in your choice of combat skill! In addition, if you reach wave 30 of The Fight Kiln within the same two weeks you will receive an additional 70,000 XP lamp for your choice of skill. See our FAQ for further details.

- The drop rate of ancient effigies is now reduced, and will further decrease in accordance with the number of effigies that you have banked or in your inventory. If you have 5 or more ancient effigies, you will no longer receive them as drops until you possess 4 or fewer. Further details can be found here.

- If you haven’t already, take a look at our latest Lores & Histories story, A Return To Stone[help], which follows the mage Fulmin as he visits the TzHaar City and meets the first Ga'al.

- For the immediate future, it will not be possible to search for a global match in the Fight Pits. Apologies for any inconvenience – we will bring this feature back as soon as we can.

- For the next two weeks, the Theatrical outfit is available at the discounted price of 1500 loyalty points.