There's a rumbling coming from the mountains north of Falador, and that can mean only one thing: a boss fight of groundbreaking proportions!

Vorago is an ancient entity, at one with the earth, who foresees chaos and conflict in Gielinor's future. He wants to prepare himself for whatever may come by pushing his limits in battle, and for that he needs to face the strongest fighters that the world has to offer. 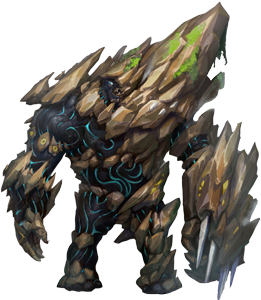 Think you can go toe-to-toe with this batholithic brawler? Head up to the cave opening north of Falador, east of Doric's house. Vorago's one of the toughest foes in RuneScape, so bring your best gear. You should also come accompanied by as many of your high-levelled, well-geared friends as you can muster - you'll need all the help you can get!

Clicking on the entrance to the Borehole (Vorago's lair) will give you a number of options for how you wish to proceed: entering the public version of the Borehole for your world, setting up a private instance, joining an existing instance or rejoining your previous battle. Note that only one public fight can happen on a game world at a time, so the quickest way to get into a fight is to start or join an instance with friends.

However you choose to enter, you'll need to challenge Vorago once you're inside. The first time, you'll need to speak to Vorago and go through the requisite conversation options, but thereafter you'll be able to use a right-click 'challenge' option on him.

Once a player initiates a challenge, up to 50 players in the vicinity (who are also eligible to issue challenges, having completed the conversation with Vorago) will be given the option to join that player.

20 seconds after the initial challenge, Vorago will unleash an attack on everyone who has accepted - a total of 50,000 damage, shared across the group. Damage mitigation abilities won't work - you'll have to take it on the chin - but survive Vorago's opening salvo, and the fight is on!

The fight with Vorago is a five-stage throwdown to the death, each stage featuring a different range of deadly attacks. Some of the attacks he uses will vary week to week, so, even once you know how he fights, you'll really need to be on your toes.

The only way to progress through the stages and, ultimately, to defeat Vorago is to rebuild the only weapon ever to put his lights out - the legendary Maul of Omens.

Pieces of the weapon are stuck in Vorago's body, and must be dislodged at certain points in the fight - during stages one, two and four. You'll need to work out exactly how to get the weapon pieces for yourselves, but we can say that you'll need to use the environment against Vorago in order to succeed. Look out for cues in the chat box as well - you'll need to be paying full attention to take advantage of the gaps in Vorago's armour.

To defeat Vorago at the end of the fifth stage, one player will need to have all three pieces of the Maul of Omens and put them together into the completed weapon. Note that the weapon doesn't need to be equipped to finish Vorago - just to be in the player's inventory.

We want you to enjoy working out how to defeat Vorago, so we're holding off releasing detailed information about his mechanics for four weeks after launch. After then, if you want information on how the boss fight works, visit the wiki[help].

Prevail, and there are some amazing rewards to be had. Foremost among these are level 90 magic weapons: the seismic wand (main hand) and the seismic singularity (off hand). These mighty weapons sit alongside the drygore weapons and ascension crossbow as the best-in-slot gear for their combat style. They do degrade, but they can be repaired for a sum of gold coins at weapon merchants such as Bob's Axes in Lumbridge, or in an appropriately fitted-out player-owned house.

Others include tectonic energy, a common drop which - with a 90+ Runecrafting level and a stone of binding from the Magic Guild's armour shop - can be used to create tectonic armour. This formidable level 90 magic gear comprises a robe top, robe bottom and helm, and is the best power-type magic armour available. It degrades, however, and cannot be repaired - once it's depleted it disappears, and must be made or purchased again.

Note that the tectonic armour cannot be traded once it has been equipped. The seismic weapons work in the same way as other degradeable weapons - as soon as they start to degrade, they are untradeable until repaired. 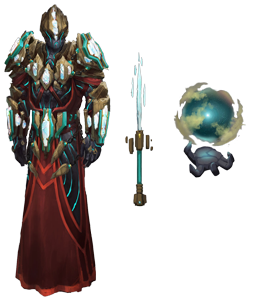 Along with other high-value drops, there's also a chance to get an ancient summoning stone, which - when used - activates Vitalis, a new follower pet.

Vorago yields five drops on his defeat, with preference given to high-performing tanks and those with the highest DPS. Fight hard, perform your combat roles well and stay alive for the best chance at getting these prestigious rewards.

Speak to Vorago himself in the Borehole north of Falador to the east of Doric's house.

While there are no hard combat requirements, you need to be able to soak up large amounts of damage and participate effectively in one of the hardest fights in the game. Very high combat skill levels are vital, as is the very best gear you can use.

You must be able to survive your share of 50,000 damage, dealt across those participating in the challenge, before the challenge begins.

It is strongly recommended that you fight Vorago in a group of at least five players.

Mod Chris L introduces us to Vorago in the latest Behind the Scenes video: