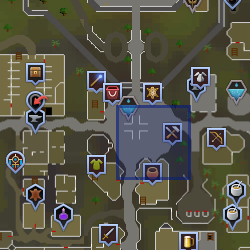 Urist Loric is a dwarf featured in From Tiny Acorns, a caper unlocked after the Buyers and Cellars quest. He is found in Varrock, near the city's general store, and runs a shop that sells crafting equipment. Upon completing From Tiny Acorns, players may buy crafting supplies from his stall, as well as obtain his monocle. His zombie version is found in New Varrock during Dimension of Disaster.

Retrieved from "https://runescape.fandom.com/wiki/Urist_Loric?oldid=23872881"
Community content is available under CC-BY-SA unless otherwise noted.