This track is unlocked during the One Piercing Note quest. 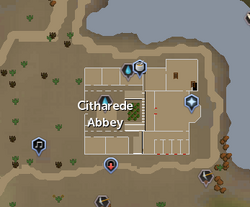 [view] • [talk]
Valerio's Song is a music track that is unlocked at the Abbey of St. Elspeth Citharede during the One Piercing Note quest.

The song is sort of a ballad consisting of a plain melody sung by Valerio's voice actor, Richard Liang, accompanied by a violin, mandolin, and drums. You can get the lyrics to the song in the camp outside the abbey.

Upon entering spoken dialogue the track will reduce in volume slightly and the lyrics will stop playing.

The song was written about Anna, and the last verse suggests that it was either written after Valerio heard about her death, or that he added that verse at that time.

The following text is transcluded from Transcript:Valerio's Song.

I can see her dancing barefoot, there are flowers in her hair
I remember like I saw it yesterday
To the sound of flutes and drums she took my hand and danced with me
And kept dancing once the music went away

Now she's talking to a preacher, he says dancing is a sin
And now I'm looking at her feet, and they don't move
And now we're standing at the abbey, and we're saying our goodbyes
But I know she'll be the one I always love

Retrieved from "https://runescape.fandom.com/wiki/Valerio%27s_Song?oldid=25816900"
Community content is available under CC-BY-SA unless otherwise noted.