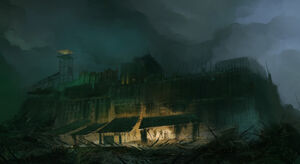 Valley of the Dead was a proposed new PvP based minigame that was announced at RuneFest 3 as an upcoming update for 2014. It was to feature Battle Royale/Hunger Games style gameplay of survival of the fittest. The minigame concept was scrapped and its basic ideas were incorporated into Ironman Mode and DarkScape.

Retrieved from "https://runescape.fandom.com/wiki/Valley_of_the_Dead?oldid=19913715"
Community content is available under CC-BY-SA unless otherwise noted.