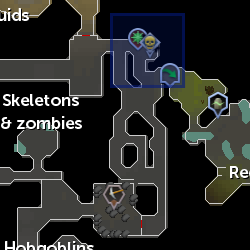 Vannaka (called the combat instructor on Tutorial Island) is a medium-level Slayer master in RuneScape. Vannaka is also one of the NPCs associated with the Varrock achievements. According to Duradel, another Slayer Master, Vannaka was once a student of his, and does not wish to challenge him due to his master's great skill.

He instructed new players in fighting with a shortsword/wooden shield and a bow back on Tutorial Island.

. He gives Slayer assignments to members with a combat level of 40 or higher. He is now one of the few Slayer Masters with no Quest requirements, along with Turael and Mazchna.

After completion of the Varrock achievements, he can change players' Varrock Teleport location between Varrock Square, the south entrance to the Grand Exchange, or to the north Varrock Altar. However, he can only do this in person and not via the NPC Contact spell. To change locations, "Talk to" Vannaka, select "About the Task System", then select "I'd like to change my teleport point." Players can talk to him to obtain the elite Varrock achievement set rewards; Varrock armour 4, an antique lamp worth 30,000 experience and three antique lamps worth 40,000 experience.

Vannaka excelled in combat and Slayer. He is a devout Saradominist, highly regarded by Saradomin himself, and previously served in Saradomin's army of warriors. He trained under Duradel, a powerful Slayer Master, who was once the best among them all, before being surpassed by his daughter, Kuradal, and later, also by Kuradal's elven student, Morvran. Vannaka once challenged his former mentor to a duel to determine the best Slayer Master, and fought bravely but was eventually defeated at his hands; following the shame from this incident, he engaged in self-imposed exile. He became a Combat Instructor on Tutorial Island, a former school for adventurers, until year 169 of the Fifth Age. Since then, he has served as a mid-level Slayer Master, based in Edgeville Dungeon.

Rescuing the cursed on Tutorial Island

The player asks him to join them on their mission to find out what happened to Tutorial Island. When the player returns to Wizard Myrtle, they see that Vannaka and Myrtle are flirting. Myrtle instructs the player to go to Mudskipper Point. After arriving there the player again sees them flirting. The player and Vannaka both go down to the sunken island. Vannaka returns to the cave he used to tutor in to search for his friend Dezzick and the player goes off to search for the other instructors. Later on the player also goes to Vannaka's cave and he teaches them how to wield a two-handed sword underwater. The player then continues to search for the other tutors. Vannaka returns during the final fight when it appears that he was captured by the evil wizard, Hector Vivian. The player aids Myrtle in freeing Vannaka and beating the Vivian. The tutors, Myrtle and the player then reunite at Mudskipper Point and everyone goes their own way after rewarding the player.

After the Smoking Kills quest, players can receive Slayer points for completing slayer tasks, based on how many tasks players have accomplished in a row. Completion of a task assigned by Vannaka will grant you:

This means that if using Vannaka over the long term, an average of 6.4 points will be granted per task.

Vannaka's special task is for the player to bring him one scale from each of the four types of chromatic dragons:

Both adult and baby chromatic dragons can drop perfect scales, which are only found while on this special task. It seems that you now always get the scale on the first kill of each type of dragon, and no further will drop when you already have one. Previously, multiple scales of the same type of dragon could be obtained, but extras were destroyed when the task was complete. It may still be possible to obtain multiple scales by killing several dragons before picking up the drops. Note that the challenge is only complete when the scales are given to Vannaka; simply collecting all four scales does not finish the task.

For Vannaka, assuming all possible assignments are available, $ S $ = 460.

Retrieved from "https://runescape.fandom.com/wiki/Vannaka?oldid=24307665"
Community content is available under CC-BY-SA unless otherwise noted.