RuneScape Wiki
Register
Don't have an account?
Sign In
Advertisement
in: Obsolete, The Dig Site, The Empty Throne Room,
and 4 more
English

View source
RSCOS
This article is about the location. For the quest, see The Dig Site. For the dungeon, see Digsite Dungeon. 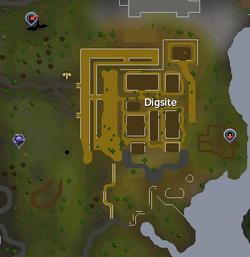 The Varrock Dig Site, formerly known as the Digsite, is an archaeological excavation area just east of Varrock. Players need to proceed far enough into the Dig Site quest in order to fully use it. It is visited during several quests:

During the Dig Site quest, players learn that the area was once Senntisten, the capital of the nation of Zaros during the Second Age. During the quest, players find a Zarosian symbol and a tablet telling all mortals to tremble before the power of Zaros. This area is said to be part of a city three times bigger than Varrock which supposedly reached to Edgeville (then known as Paddewwa). It was destroyed during the God Wars and replaced by Saranthium, which was destroyed several hundred years before Avarrocka was established in 700 of the Fourth Age.

After earning 100 kudos in the Varrock Museum miniquest, players will have future access to an unreleased island north of Morytania. The barge to travel there is currently being built just north of the Digsite. Workers are too busy to talk now.

For players who are doing or have completed The Dig Site quest, the north-west winch at the Digsite provides access to the Digsite Dungeon. A rope must be used with the winch to enter the dungeon.

Players can dig at Digsite during and after the quest. Have a rock pick, trowel, specimen jar, and specimen brush in your inventory, wear leather gloves and Leather boots, and use the rock pick on the soil. This gives 8 mining experience, and gives the following items:

Players can also pan at the south-east part of digsite with panning tray. They may get these items when panning:

In the south-east section of the digsite it is also possible to search the specimen tray with a specimen jar in the inventory. Doing so will have the player obtain the following:

There is a barrel that can be opened near the tents in the south-east corner of the digsite.

When examined, the caption reads "a sealed barrel with a warning sign on it." When attempting to open it, you are told that the "lid is shut tight" and that you'll "have to find something to lever it off.". You are then presented with the choice of using a hammer, a knife or a chisel, but none of these options are appropriate to open it.

By using an iron dagger found in the nearby specimen tray, you are told that the dagger's blade might break, and that you need something stronger.

The barrel is part of the quest The Dig Site.