Varrock Square, also known as Varrock Central Plaza or occasionally Varrock Market, is a square found directly south of Varrock Palace and is one of the most popular places in Varrock. It contains a large fountain with four statues on each side, which are the square's signature landmarks, with Benny selling newspapers nearby. The fountain is a monument to four princes who fell in battle against the forces of Morytania. Players teleporting to Varrock appear here, unless you have completed the easy Varrock Tasks and changed your teleport to south of the Grand Exchange. 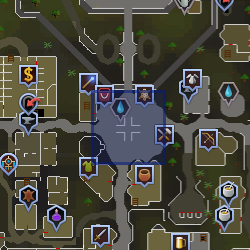 Varrock Square is one of the city's largest business centres, and as such hosts a number of shops and open-air stalls. Full stores such as Varrock General Store, Thessalia's Fine Clothes, and Zaff's Superior Staves surround the Square. Stalls such as Baraek's fur stall and Urist's Crafting Supplies can also be found here. Benny also maintains a newsstand here, from which players can buy Varrock Herald newspapers. Gypsy Aris also runs a fortune-telling tent adjacent to the Square, although this is used only during the Demon Slayer quest. A number of non-player characters also wander the Square, including Shilop, Wilough, Urist Loric, Baraek, and a market guard. Before the removal of the Romeo and Juliet quest, Romeo could also be found here, who could in turn be spoken to in order to begin the quest.

Many events took place in this area, including many riots such as the Pay to Pk Riot and Wilderness Riot, as well as a portion of the 2005 Christmas event. Many free-to-play players consider it to be a popular area for events, trading, and social interaction.

During the Diamond Jubilee event, the Varrock Square was decorated for the Queen's arrival. A number of NPCs, including Bang Ersenmash, Big Ben, Essjay, Minnie Coop, Will Shakenspear and several Queen's Guards are found in the area. Also, the fountain was removed to make way for the Queen's carriage.

Several quests are involved in Varrock Square, such as: 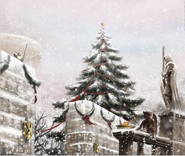 The Christmas card appearance of Varrock Square, released by JaGex. 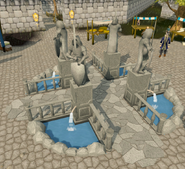 The fountain in Varrock Square.

Varrock Square in snow during the 2007 Christmas event

The Varrock Square during the 2012 Easter event.

Decorated Varrock Square in honour of the Queen.
Click an image to enlarge
Retrieved from "https://runescape.fandom.com/wiki/Varrock_Square?oldid=21440435"
Community content is available under CC-BY-SA unless otherwise noted.