RuneScape Wiki
Register
Don't have an account?
Sign In
Advertisement
in: Quest NPCs, Non-player characters, In Search of the Myreque,
and 11 more
English

View source
watch 01:54
Arcane: League of Legends - The Loop
Do you like this video?
Play Sound
OS
Loading...
StandardDisguised

Veliaf disguised as a vampyre.

Veliaf Hurtz is the leader of the Mort Myre division of The Myreque, a group dedicated to fighting Lord Drakan's dominion of Morytania and liberating the region. As of River of Blood, he, Ivan Strom, Safalaan, and the player are the only known Myreque members left alive.

Veliaf is a bold and resourceful leader, and is very dedicated to his cause. He tries to do what's best for the Myreque, and when Sani Piliu and Harold Evans, two of his order's members, are killed in the events of In Search of the Myreque by Drakan's lackey Vanstrom Klause, Veliaf is distraught. Through the Myreque quest series, Veliaf gives the player many tasks to complete that will help the Myreque and their cause, such as finding them a new base in Burgh De Rott and creating an ancient staff that is highly effective against the Vampyres of Morytania.

During The Lord of Vampyrium, he assists the Meiyerditch Myreque in carrying out an assassination attempt on Lowerniel Drakan. However he is suspicious of Vanescula Drakan, thinking that she has a secret motive behind her assistance to the Myreque. He is saddened by the loss of several allies while in Drakan's Tower, but continues to press on, where he assists the player in fighting several Venators and Drakan himself. After he watches Safalaan being killed by Vanescula, he falls into a depression and dismisses what's left of the Myreque. A cutscene later in the quest shows him impaling his sickle onto a plaque in the Burgh De Rott hideout and leaves.

He appears again north of Canifis where he wants to build statues to remember the fallen Myreque members in the In Memory of the Myreque miniquest.

When spoken with after completion of both River of Blood and In Memory of the Myreque, he thanks the player for their time together, grateful at finding out Safalaan is alive, and promptly teleports away to Castle Drakan shrouded by a smoke bomb. Afterwards he can be found on the roof of Castle Drakan with Safalaan, Efaritay, Vanescula Drakan, and Aeonisig Raispher. 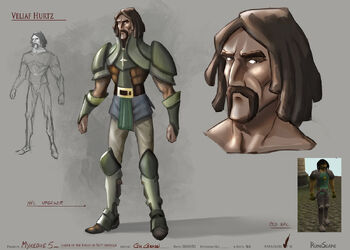