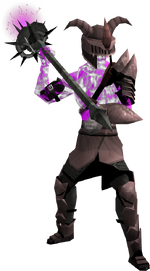 Verac the Defiled is the youngest of the six Barrows brothers. Like most brothers, he attacks with melee, using his flail.

Verac's set effect: Verac's Defilement, allows Verac's hits to have a chance to ignore the player's armour bonuses in a similar fashion to a player wearing a full set of Verac's equipment. This effect does not trigger any animations or sound effects, so players should monitor their life points carefully. Protect from Melee/Deflect Melee is advised when attacking Verac to lower his overall max hit.

Verac's crypt is located to the north-west of the Barrows area. He also shares this crypt with Akrisae the Doomed after completion of the Ritual of the Mahjarrat quest. He has a max hit of around 1500 and should not be taken lightly.

Verac's weakness is Earth spells, therefore it is recommended to use spells such as Earth Surge or Shadow Barrage against him. He can also be taken down easily with other strong spells, or strong melee weapons such as chaotic or drygore weaponry.

Verac does not drop his main rewards directly; instead, his equipment is added as possible rewards from the Barrows chest. See Barrows#Rewards for more information. However, Verac can directly drop the following items.

Verac returns with his 5 brothers in Barrows - Rise of the Six, greatly enhanced by Sliske's experiments into the Shadow Realm. As when fought normally, he retains his set effect, and also has various other abilities. He can use an ability called Soul Bind where he will bind the player's soul to a spot marked by a green target with arrows. While outside of the area, the player will suffer a rapid prayer drain unless they move to that spot.

During the 2016 Easter event, Verac the Defiled and his brothers play a role as the workers (bobble-numbskulls) of Sliske's chocolate factory. They resembled their bobble-head versions.

During Kindred Spirits, Verac is subjected to torture in one of Sliske's "games", and he requests the player to release the Zamorak statue to shown his devotion to Saradomin. However, the player manages to find out he is lying and rips out a Saradomin key from him, revealing to them and his fellow brothers that even though he is supposedly a devout follower of Saradomin, he secretly worships Zamorak.

Verac, along with his brothers, appeared in Sliske's Endgame, being the second intended wave in Sliske's attempts to destroy the World Guardian. However, the Barrows Brothers had managed to regain a modicum of control over their own actions, and chose to aid the World Guardian, attacking Sliske's wights and champions.

Concept art of Verac the Defiled.

The new model for Verac's armour revealed at RuneFest 2011.

Shadow Verac wearing a Santa hat during Christmas.
Click an image to enlarge

Retrieved from "https://runescape.fandom.com/wiki/Verac_the_Defiled?oldid=23452708"
Community content is available under CC-BY-SA unless otherwise noted.