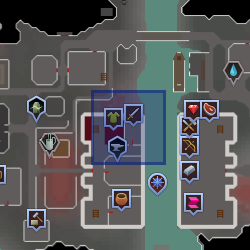 Vigr is a dwarf that lives in the dwarven capital city of Keldagrim. There he runs a warhammer shop, simply known as Vigr's Warhammers. The shop stocks bronze through adamant warhammers. He and his shop can be found on the ground floor of the Consortium's palace, on the west side of the River Kelda.

Vigr is, even by dwarven standards, in a very bad mood. He has a particular dislike of humans, and is reluctant to even open his shop for them. He is a loyal follower of The Red Axe, and holds a strong dislike for the other companies as well. After the events of The Giant Dwarf, Vigr is quick to deny any involvement with the company, however. He greatly dislikes the dwarves of eastern Keldagrim, calling them a "useless" population, and though he is aware of their conversion into chaos dwarves, states that it is better than doing nothing.

He is later arrested by the Black Guard under the suspicion that he is a Red Axe spy. When the adventurer brings proof that he was in contact with them, he confesses and begs for mercy. While under arrest, Sieglinde temporarily takes over his shop. They can then decide to spare, exile or execute him. If spared, he regains control of his shop, and thanks them for saving him from the Red Axe, and joins The Orange Flame. If exiled, he can be found south of Yanille.

Retrieved from "https://runescape.fandom.com/wiki/Vigr?oldid=24562550"
Community content is available under CC-BY-SA unless otherwise noted.