The Viyeldi caves are an extensive cave complex beneath the Kharazi Jungle. They play a large role in the Legends' Quest and can only be accessed during and after the quest. To enter, the player must go to the north-western part of the Kharazi Jungle and squeeze into the rock there. This requires 50 Agility. The dungeon's history remains largely unknown, but it is suspected that it was constructed a long time ago by the native Kharazi tribes. To progress in the dungeon, certain tests must be completed, which can require items and levels in skills.

The caves were created by a past civilisation of which nothing is known, with the ruins in the caves being the only known remnant. At some point, the caves were excavated by a group of dwarves searching for the source of the pure sacred water that flows through the Kharazi Jungle. Something apparently went wrong while they were excavating the caves as the caves were cursed soon after. Any who died after this time, while searching for the source of pure water located at the end of the cave, were cursed to protect the cave.

The first to die searching for the source was a sorcerer called Viyeldi, after whom the caves are named. His spirit was then bound to protect the water. Later, three heroes known as San Tojalon, Irvig Senay and Ranalph Devere died while searching for the water, causing their spirits to fall under Viyeldi's control and guard the caves alongside him.

To go deeper into the dungeon, the player must squeeze through the crevice behind the bookcase in the first room. To venture even further, a pickaxe and lockpick are needed to break the large rocks and to unlock the old gates, respectively. You will then need to use your Strength to force a door, Agility to jump over a wall, and finally runes and an uncharged orb to cast a Charge orb spell.

After the Legends Quest, this dungeon becomes obsolete for most players. Those completing the Karamja Diary will have to return to kill a Death wing for one of the hard tasks, but other than that, the dungeon usually remains unvisited. The final room of the Dungeon contains three Lesser demons, so it could potentially be used to kill them, but other locations are much easier to get to.

The entrance to the Viyeldi 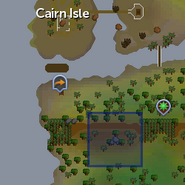 Ugandulu's home and the fire octagram

From front to back: The Tests of Thieving, Mining and Strength

The magical pools and the Test of Magic

An amount of barrels and the Test of Courage

The Test of Agility at the bottom. The blue hat at the top is Viyeldi.

The very bottom of the dungeon with the three fallen knights and their clones, the Test of Combat.

A lava furnace at the bottom, possibly a Test of Smithing

The final bit of the dungeon, where the sacred water is
Click an image to enlarge

Retrieved from "https://runescape.fandom.com/wiki/Viyeldi_caves?oldid=25382467"
Community content is available under CC-BY-SA unless otherwise noted.