Start a Wiki
OS
For other outposts, see Outpost (disambiguation). 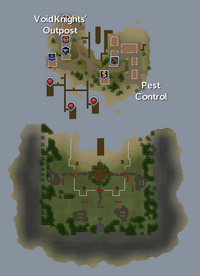 The Void Knights' Outpost is a small island in the very south of the current map, just south-west of Ape Atoll. This island is nearly abandoned on non-Pest Control worlds, but still is popular with players seeking to repair Barrows armour.

To get there, either speak to the Squire on the pier at Port Sarim to travel to the island by ship free of charge, use the teleport option of a Void knight seal, or use a Call to Arms scroll, with a summoned Void ravager, Void shifter, Void torcher or a Void spinner.

The Elder Sword engram, used for the Memorial to Guthix, is found on the south-east end of the island on top of a barrel near the beacon under a canopy.

The headquarters of the Commodore

A version of the Void Knights' Outpost before the graphical update. Note the greatly reduced size.

Concept art for the updated ferry.
Click an image to enlarge

Retrieved from "https://runescape.fandom.com/wiki/Void_Knights%27_Outpost?oldid=25382065"
Community content is available under CC-BY-SA unless otherwise noted.