Void Pests are wicked beasts that are most famous for their tendency to invade realms. Contrary to what their name leads to believe, they do not inhabit the Void, but they use it to be able to travel from their own realm to other ones through portals. Pests live in warm and humid habitats with small lakes and pools. Their realm is ideal for this, also containing jungle and wood regions. Currently, the Pests are invading Gielinor at desert islands in the Southern Sea, which prompted Admiral Dracs Melrose to re-instate the Void Knight order to fight them off in Guthix's name. Around 150 of the Fifth Age, the attacks worsened, due to the involvement of psychopath wizard Melville Grayzag who experimented with the pests to use them for his own goals of vengeance (read more here). The pests are such a dangerous threat to the world that one of the Guardians of Guthix, the Valluta, was appointed to protect Gielinor from them (and other extra-dimensional invaders).

Most of the known information on pests comes from the void pest research notes of Jessika, a young researcher who had been tricked by Grayzag (posing as Professor Melville) to collect a pest and release it onto the mainland for him to "study". She has concluded that the pests are able to communicate through a hive mind and have a system of castes, with workers, drones, soldiers and a queen. Despite some pests showing a degree of sapience, they generally react to instinctive impulses. The following list summarises the known types of pests: 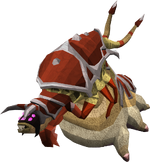 The pest queen rules the pest hive and decides what to do, e.g. where to attack next, etc. Until recently, very little was known about the queens since they were too large to fit through the known portals. However, Grayzag managed to summon the ruling queen and it was discovered that queens are immensely powerful. Surpassing an average Mahjarrat in power, the queen, although moving slowly, is able to inflict serious damage with a deathly stare that causes severe magical harm as well as being able to gnaw at enemies with her mandibles. The queen has two tails which she can use as whips, too. Occasionally, she can use a "loading" in combat which, when unleashed, almost instantly kills any non-pests in her vicinity, making her a very, very dangerous threat. Grayzag's queen was killed by the Knight Order Alliance of 169. The queen also has a protective shell on her thorax and abdomen and sharp teeth which she presumably uses to chew on her food. 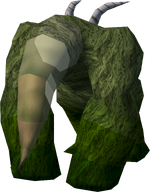 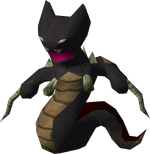 The torchers are quite unique, being able to utilise magical spells. They resemble a mix of a bat and a leech, being able to fly and fire spells with their mouth from a long distance away.

Shifters are standard warriors in the pest army. They can deal rapid damage with their sharp limbs, as well as teleport short distances freely. Thus, they can surprise and overpower an enemy or carry another pest in danger out of the battle.

Brawlers are likely the least intelligent pest, but their colossal size and strength make up for it. Brawlers look like large gorillas with a tail-like appendix where the face would be, and are capable of dealing very powerful blows.

Defilers are the archer assassins of the pest army. They appear to have a large supply of bone barbs they carry with them, and can fire these from far away at their enemies with great precision. 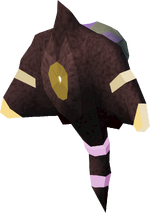 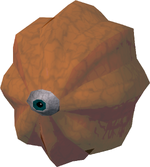 Void drones are tiny pests that resemble ladybugs in a way. They are the pest scouts and the queen sends a group of these forth onto a future battlefield to explore. Jessika is known to have possession of one, so it appears they may be trained.

Pest drones are much larger than their scout counterparts and act as personal bodyguards for the queen. They stay close to her and are able to heal her when she is damaged. They are able to fly and have one eye in the front of their face.

Splatters are strange but dangerous creatures. They consist mostly of a transparent sac filled with a very acidic fluid which they use to dissolve obstacles or barriers when advancing. Other than that, they only have one eye. In addition, the splatters may perform suicide attacks when the nest is to be defended, splattering the acid onto nearby enemies.

Ravagers are pests with extremely large claws. While this makes them appear very dangerous in combat, they are actually feeble fighters, despite dominating the front lines. The claws are used to build nests or ravage obstacles.

Spinners look in a way like flying jellyfish. They are able to heal the portals where the pests came from, but are unable to summon any new ones.

Void leeches remain behind when an attack occurs and secrete large amounts of a sticky, purple fluid they call 'food goo'. This oozy substance is dried and can be used as a way of healing for injured pests, as well as draining the lifeforce of non-pests in its vicinity. The goo is also used to 'supercharge' pests before an attack. Leeches appear to be the most intelligent pest, capable of human speech.

Retrieved from "https://runescape.fandom.com/wiki/Void_pests?oldid=25381628"
Community content is available under CC-BY-SA unless otherwise noted.