Start a Wiki
This article is about the boss monster. For the music track, see Vorago (music track).
[FAQ] • [doc]

Vorago is a gigantic, rocky, and extremely powerful boss monster created by the Anima Mundi, or as he refers to it, the "earth soul".[1] He has been billed as the toughest boss monster in RuneScape. He is an ancient being that caused chaos in the past, but was later defeated by a powerful weapon known as the maul of omens, prompting him to fall into a restorative slumber. Vorago used his remaining power to destroy the weapon. Towards the end of the Fifth Age, he awakened, now friendlier, albeit no less powerful.

Vorago is found in the Borehole, a large cave north of Falador, and wishes to test his strength against challengers in order to prepare to defend Gielinor against future threats, such as the gods, should he deem them as such. If challenged, Vorago uses five stages of varied attacks that change on a weekly basis.

Using the maul of omens to finish him off is a requirement for trimming the completionist cape.

Vorago is located in the cave just north of Falador, east of Doric's hut. The fastest way to get there is by teleporting to the Falador lodestone and running north, past the statue with Saradomin, or simply use Falador Teleport (or, of course, the teletab version).

There are two distinct ways to start a fight with Vorago: with or without an instance.

You could also use the one non-instanced Vorago spawn on each world, which costs nothing but is open to anyone. If Vorago's head is not visible (hence a rocky look on the wall), it means that a team is currently fighting him. If his head can be seen, he is not in a fight.

Once inside the cave, there are a series of chasms that can be jumped across to go to the northern area. Talk to Vorago, and go through all the choices that involve why he is here and challenging him. Once these are done, two coloured messages should show up saying that you are now eligible to fight Vorago.

Upon taking the challenge from Vorago, all nearby players will be given the option if they will want to fight with you or not. After 20 seconds, he unleashes a blast of 50,000 damage which is split between all players who accepted his challenge. Players who do not accept the challenge will not be harmed by the blast. The minimum number of people required to survive the blast normally is four, if each player has over 12,500 life points, although more players are required if at least one player has less. While it is possible for fewer than four players to survive the blast via Warpriest armour, Vorago will not let them in.

Vorago's fight consists of 5 phases, each taking place in a different room, and each having their own mechanics and attacks. Vorago also has a weekly attack that changes based on the current week. He has 6 different specials, changing every Wednesday at 00:00 UTC.

The hard mode option for Vorago is unlocked after a player performs the finishing blow on Vorago with the Maul of Omens on all six of the weekly Vorago rotations (Rock fall, Scopulus, Vitalis, Green Bomb, Teamsplit and The End). You can see which conditions you lack by reading the sign near the entrance to the borehole.

Hard mode is not available in the regular or basic instanced modes. To start up a hard mode instance, the player must use the instance interface and click "Hard Mode".

Unlike normal mode, entering a fight in hard mode requires players to survive a hit of 70,000 damage as opposed to 50,000. In hard mode, Vorago's health is still the same, however his attacks are increasingly powerful, and spawns a barrage of red bombs upon entry. In addition, when Vorago does a mage (blue bomb) attack he will always send two pairs of bombs instead of one.

Any special attacks (reflect, red bombs, teamsplit etc.) will not have a warning message. His stomp attack also reflects part of the damage he dealt on the player to the familiar, which can kill them. He has 11 phases, with all versions of phase 3 as separate phases (referred to as phase 3-8) and an additional phase on its phase 5 (phases 10 and 11) where he has to be mauled twice in phase 10 and 11.

If killed in hard mode, he has a greatly increased chance of dropping the ancient summoning stone, tectonic energy and seismic equipment. The person who has used the maul on him during phase 11 will receive the title [Name] the Defeater and also one piece of the Outfit of Omens cosmetic override per hard mode base rotation mauled.

Vorago received a new weekly special on 11 December 2013, the teamsplit rotation. This rotation was supposed to appear during that date, but was replaced with the green bomb week due to the phase needing some tweaking. In addition, all players who possessed the "the Defeater" title had it removed. It is possible to regain the title by defeating Vorago in the new rotation.

On 8 December 2014, "the end" weekly special was introduced and players who defeated Vorago in a team of 7 or lower were notified by a Scopulus that Vorago has changed, and that their previous best has been taken out. On top, players with 'the Defeater' title had been reset. The title can be reobtained by defeating Vorago on the new rotation. Hard mode was also locked until players defeated Vorago in the new rotation. In addition, many mechanics were changed or rebalanced: red bombs used during phase 5 Ceiling Collapse and Scopulus weeks were replaced with teamsplit and purple bombs respectively, Scopulus max hp and damage were significantly increased and they gained the ability to heal, hard mode had some changes such as increased Vitalis orb damage, ceiling debris was changed to deal fixed damage rather than split among people caught in and final phase was changed so when mauling Vorago he jumps back to the arena, changing his attack rotation and requiring a second finishing blow to kill him.

On 12 December 2014, Jagex Moderators gave a "teaser" to the new rotation. However, unlike other teasers, all players could take part in the new rotation, although Vorago was fought in Hard Mode since the current rotation was still Team Split. Players who tried to challenge Vorago in a Jagex Moderator's instance were still given the message if they wanted to challenge him, although saying yes resulted in the message "Only Jagex Moderators can do that today!", even though players who wish to challenge Vorago in Hard Mode are required to have mauled all current rotations before doing so. In addition, Vorago gained two extra phases on Hard Mode.

In late 2014, an easter egg was added to Vorago to change him into Voraga, a pink variant of Vorago, when pink dye is used on him as a joke for a female companion. This only works on World 62 due to being the homeworld of the clan that suggested it. Voraga is the only thing in the game to have pink right click text. The dye will only last for one phase, and then Voraga will transform back into Vorago again, requiring a player to dye him 5 times for a complete kill.

The patch notes of 16 March 2015 prevented players from abusing a glitch during Vorago's "The End" phase. When Vorago says "This is...", his arms raise up. If players stood in the middle of the arms when he dropped them down, they could move out of the arms into areas he was not covering, which protected them from his chokehold damage.

Vorago drops five drop sets upon defeat. For each phase, 3 slots are remembered, for the player who:

This gives a total of 15 drop chances (5 sets of 3). At the end of the fight, a random slot for each phase is chosen, and the player in that slot will receive the drop. It is possible to occupy multiple slots for each phase (e.g. receive the most bombs and dealing the most damage). If the player who occupied a slot that was picked but the player is not present, then the drop will go to a random player who survived the fight.

The location of the drop for each phase is illustrated in the table to the right.

Vorago's seismic weapons constitute the normal drop in a drop slot. The chance of getting a seismic item is 1/400 per item per slot, making any seismic drop roughly 1/200 per drop, or 1/40 per kill; however, only 1 unique weapon can be dropped per kill, if at all.

These drops are unaffected by LootShare being active, and will follow the normal drop distribution mechanic. For example, if a team takes down Vorago with LootShare active, the drops will be distributed via the LootShare system. If, in that same kill, a player did the most damage in phase 3 and was chosen to win that phase, they could potentially receive these drops outside of the LootShare system. If a player who has already received a pet receives the same pet as a drop, then the pet item will be passed to a different eligible phase winner who does not have it.

Vorago drops 0–5 sets of 5 charms, 5 charms per drop slot. The following percentages are calculated per set of charms dropped. 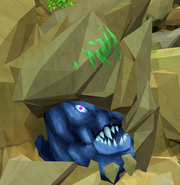 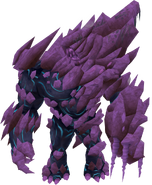 Retrieved from "https://runescape.fandom.com/wiki/Vorago?oldid=14042365"
Community content is available under CC-BY-SA unless otherwise noted.