This track unlocks on entering a battle against Vorago. 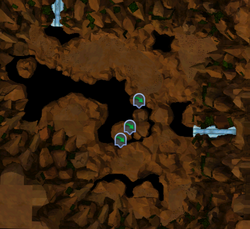 Vorago is a music track that is unlocked upon entering the lower levels of the borehole after starting a fight with Vorago and surviving his raw power.

This music track has a tempo of 120 and is in the key of C Minor, it is similar to the track called Anima.

Retrieved from "https://runescape.fandom.com/wiki/Vorago_(music_track)?oldid=25380642"
Community content is available under CC-BY-SA unless otherwise noted.