The most loyal person you'll ever know. 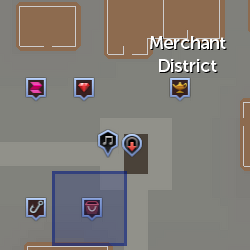 Wafa is a vendor that runs the Loyalty Programme Shop. She is located in the centre of the Merchant district in Menaphos.

Wafa can return lost auras and re-colour equipment, but unlike Xuan, she cannot clear the player's title.