Start a Wiki
OS
This article is about the character. For the achievement, see The Wanderer. 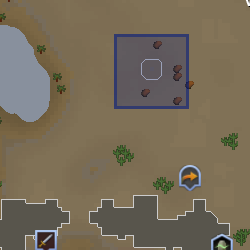 The Wanderer is a strange woman outside Sophanem and the starting point of Icthlarin's Little Helper, in which the wanderer hypnotises the player to break into Sophanem through a secret passage, enter a pyramid and steal Klenter's soul. She is afraid of cats.

She uses the player by hypnotising them and forcing them into stealing a Canopic jar from the pyramid. However, the player for some reason awakens in the streets of Sophanem with the jar, and after touching the door of the nearby pyramid has a flashback where they see themselves traversing the pyramid's traps. After talking with the Sphinx and the High Priest, they decide to enter the pyramid (with the help of their cat) to return the jar to its place. There, they have another flashback where they defeat the jar's guardian and take the jar away. It is there that they realise that they weren't controlling their actions and return it.

The player, however, had unknowingly planted one of Amascut's unholy symbols in one of the sarcophagus while under her control so she could teleport straight inside the temple whenever she wanted. The player remembers this deed in yet another flashback and goes to warn the priests who are currently in the pyramid. As soon as the player arrives to foil her plots, she possesses one of the priests and has them try to kill the player. But this fails, after which she goes back to hiding. It is then revealed (in another flashback) that her spell was seemingly lifted from the player by her brother Icthlarin, before the player awoke in Sophanem. The wanderer is actually Amascut, the Menaphite goddess of destruction.

Retrieved from "https://runescape.fandom.com/wiki/Wanderer?oldid=24926501"
Community content is available under CC-BY-SA unless otherwise noted.