Combined Attack and Strength levels at or greater than 130 or skill mastery of one of the two (level 99). 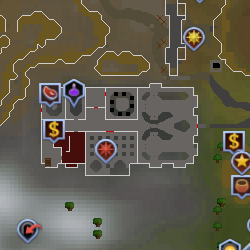 Harrallak Menarous owns and operates the guild. The various members of the guild run activities, awarding points for participation. These points are used to gain temporary access to the combat room on the top floor, where cyclopes and cyclossi can be fought for defenders. The unofficial world for the Warriors' Guild is world 9.

The Warriors' Guild is located in Burthorpe and can be accessed in a number of ways:

Kamfreena runs the cyclopes' room on the top floor, allowing warriors temporary access in exchange for points. The room contains several cyclopes and rarely a cyclossus which can be fought for their defender drops, starting with bronze and increasing in quality up to dragon. The rune and dragon defenders are required to harm the cyclossus. In order to receive the next defender, warriors must show their current defender to Kamfreena.

Attempting to use Ancient Curses anywhere within the guild will cause Harralak to intervene, stating that he frowns upon the use of curses. Only standard Prayers can be used. Similarly, the dwarf multicannon and its variants cannot be used.

Kamfreena will warn the warriors when they have run out of tokens. If they do not leave within a minute, she will teleport them out and chastise them for not leaving immediately.

Tokens are unique to each activity, and the multi-token mode in the cyclops room drains tokens from every activity. It drains less total tokens than single-token mode, and comes with benefits relating to the player's drops. However, getting tokens in some activities is extremely slow and, for some players, may not be worth the time.

The animation room is located on the ground floor, west of the guild entrance. This room is one of the most commonly used rooms in the guild to gain tokens. Players will fight against an animated set of their own armour. To play this activity a player must bring a set of normal metal armour (bronze, iron, steel, black, mithril, adamant, or rune). This set should consist of a full helm, platebody, and platelegs, and must be the same type of metal. Weapons, shields, plateskirts, and special armour (such as trimmed or heraldic) cannot be used with the animation machines.

Players should bring armour and weapons that are appropriate for the level armour that they will be fighting. To begin the activity, players must use one piece of the armour they have brought on one of the animation machines. The armour set will come to life and start attacking the owner of the armour. If a player defeats the animated armour they will be rewarded with Warriors' Guild Tokens for defeating the armour. The higher the armour type a player fights, the more tokens they will receive.The max amount of tokens you can have in animation room is 65535. There will also be a decreased chance that a piece of the armour is destroyed in the fight. If a player logs out after defeating their armour set and does not pick up the armour it will automatically disappear. Note that if you kill your armour on the square in the middle of the animator, the armour will not show up. You must right-click the square to retrieve your armour.

Shanomi does not allow players to use anything other than ordinary plate armour on the animator as "bad things happen", and dragon armour is not allowed because it is too expensive.

The dummy room is located on the ground floor, west of the guild entrance. There are no requirements for this activity. This room will test players' abilities in attack styles with various dummies. To defeat these dummies players must choose the correct attack method to destroy them. Players may look at the poster in the dummy room for more information on what styles to use for each dummy. Each dummy correctly hit will award a player 15 Attack experience and 5 tokens.

There are eight dummy types in the dummy room, covering all three melee attack styles, (slash, crush, and stab). As a result, choosing the right weapons for this activity is important. Players will need at least three weapons to be able to hit every dummy. The attack bonuses for the weapon do not help in this activity so a player will be just as effective with a bronze longsword as they will with a Drygore longsword. If a player does not have the ideal weaponry for this game, they can visit Anton on the first floor of the guild. The activity is rather slow and gives a little under 3000 tokens an hour.

Tips for the dummy room

The catapult room is located on the first floor, west of the Armoury. There are no requirements for this activity. To begin this activity a player must speak with Gamfred, the dwarf outside of the room, to obtain a two-handed defensive shield. This shield can only be equipped while standing inside the Catapult room. Once a player has equipped the shield, they must pay careful attention to the ammunition that is being shot at them so they can select the appropriate defence style. When you see a spiky ball, use stab defence; an anvil, blunt defence; a spinning blade, slash defence; and finally a magic missile, magic defence. Each successful defence will award a player 10 Defence experience and 4 tokens. Each missed defence will inflict up to 40 damage. Although this game is arguably the easiest at which to be successful, its token pay-off is relatively slow, at around 50 tokens per minute if no mistakes are made since the catapult shoots a tiny bit faster than every five seconds. It could also be difficult for players dealing with considerable lag.

The shot put room is located on the first floor, in the north-east corner of the guild. There are no requirements for this activity. To begin players must pick up a shot and select one of the three throwing styles. To pick up a Shot you must have your glove slot, main hand slot, and off-hand slot free. If a player fails, they will drop the ball on their toe, causing 10 damage in the process. Players may also occasionally throw the shot at the Ref, causing him to shout "Oi! (player's name), don't throw the ball outside the range!". To decrease the chance of failure, players can use a pestle and mortar with ashes to get ground ashes. They may then click on the ash to dust their hands. In a hidden update at an unknown time there was a delay factor put in place, it was to prevent players from speed clicking through the mini game; after a player throws a shot they must wait a second before picking up another. In the case that they attempt to quickly grab another shot the ref will say a variety of phrases ranging from, "Pace yourself" or "Sorry, I'm not ready yet" or "Just a moment, I dropped my hanky". If the player succeeds at a throw, they will gain Strength experience at a rate of 1 XP per yard thrown and tokens.

Using the 22lb shot, the results possible are:

Prior to 25 April 2011 this event would use a portion of the players energy. This was changed during an update and now no energy is used.

Jimmy's Challenge is located on the first floor, south of the Shot Put room. There are no requirements for this activity. To begin players must click on a keg in the room. They will need to balance the keg on their head, and then attempt to balance more kegs on top of this one, up to a maximum of five. To balance kegs players must have their head and hands free, meaning that no head, main hand, off-hand or hands slot items can be equipped. If a player does get 5 on their head, Jimmy will say, "Wow! That'sh bery impr....imp...impresh..... good _________! Equalsh my record!". If a player loses balance, the kegs will cause a small amount of damage to the player, the amount depending on their current life points. The only safe way to get rid of the kegs is to walk out of the room. Players receive more tokens the more barrels are being balanced and the longer they are balanced. Players can also tag the coloured furniture in the order displayed at the top of the screen for a slight Strength XP reward.

The odds of successfully balancing all 5 barrels is controlled by the player's run energy level. Players can drink energy potions while they have kegs balanced on their head, and should do so to keep their energy level as close to 100% as possible. Players with an energy level between 90% and 100% have a low probability of dropping barrels and a high probability of being able to balance an additional barrel successfully. Using the Oo'glog salt water pool for 100% energy is highly recommended, as being at 100% run energy the entire time can yield over a hundred tokens per game. You can use the explorer ring to raise your run energy when needed. If those options are unavailable, open an interface (Equipment interface, Price Checker, etc.) to raise your run energy or talk to Jimmy. It should be noted that the time in the interface does not add to your score. One may also rest to recover run energy between keg rounds.

Tips for the keg balance room

The Warriors' Guild has many shops to aid players in playing the various activities within the guild or fighting Cyclopes.

Located on the south wall of the first floor, Anton buys and sells most weapons dropped by Cyclopes. Anton does not buy or sell black knives, which are a very common drop of Cyclopes, or defenders, which are not tradeable. Anton offers the same price as High Level Alchemy yields.

Lidio is located in the north-west corner of the ground floor and sells medium-level foods. Specifically, Lidio sells cooked trout (68 coins), bass (270 coins), plain pizza (200 coins), potato with cheese (350 coins), and stew (100 coins). After the September 2009 shop update, the food vendor in the Warriors' Guild no longer has infinite stock. Thrifty players may want to keep some weapons from slaying cyclopes and sell them to Anton, then buy food.

Jade is a banker, located in the south-west corner of the ground floor of the guild. Jade gives players full access to their bank accounts.

Retrieved from "https://runescape.fandom.com/wiki/Warriors%27_Guild?oldid=24533390"
Community content is available under CC-BY-SA unless otherwise noted.