Start a Wiki
OS
This article is about the weird old man. For other old men, see Old man (disambiguation).

Outside the Kalphite Lair

What's he mumbling about? 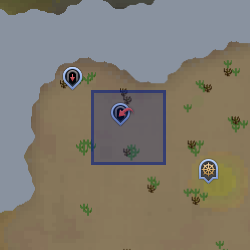 The Weird Old Man is a man gone insane outside the Kalphite Lair. His origins are unknown, but he found the Kalphites and warns adventurers of the dangers he encountered.

If the player has already gone into the Kalphite hive, he will simply say "No thanks, I don't want any" when spoken to.

The fastest way to get to the Weird Old Man is to use the Fairy Ring network and dial BIQ, then walk north-west.

Retrieved from "https://runescape.fandom.com/wiki/Weird_Old_Man?oldid=24562831"
Community content is available under CC-BY-SA unless otherwise noted.