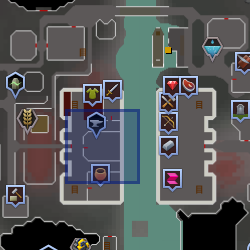 Wemund is a dwarf that runs a small shop in western Keldagrim. His store is named Wemund's Wrench Warehouse and specialises in wrenches. He also stocks other goods that relate to the dwarves' steam engine technology, such as pipes and boilers. He seem to smith many of the items himself, as suggested by the anvil found within his shop. He has only one other employee, a Dwarven Engineer that was recently forced to retire due to a mining accident.

Wemund is also aiding Professor Manglethorp, a gnome ambassador from the Grand Tree. As the professor has come to investigate the dwarves' advancements in technology, Wemund's shop is the perfect location for an introduction.

Retrieved from "https://runescape.fandom.com/wiki/Wemund?oldid=24563027"
Community content is available under CC-BY-SA unless otherwise noted.