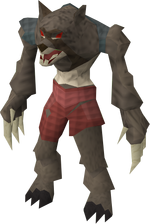 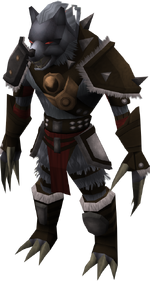 Werewolves are found in Canifis. They have low defence for what their combat level suggests. They appear as normal humans (level 28) until provoked (meaning if you attack them), unless the player wields a Wolfbane dagger, in which case they remain human. In either case they drop Wolf bones. They can hit up to 80 as a werewolf, and up to high 50's as a human. If you are a lower level player (70-) training on them you may want food as their attacks are accurate. You can power train on them in the bank, because if they harm you and you kill it, in the bank your health is automatically regained. There is one in the bank that respawns every 20 seconds or so.

Level 89 Werewolves can be found in the God Wars Dungeon, and have a maximum hit of 256. They also have better defence and accuracy than their Canifis counterparts, and are also aggressive to players not wearing an item of Zamorak. They are spread out all over the area except the Bandos area. Werewolves can be killed here for a Slayer assignment, but this is usually not recommended due to the length of the area. However there are many Spiritual Warriors and mages who can quickly decimate them, so players who do not care about the respawn time can quickly kill them there.

They only count towards Slayer tasks and exp when killed in the "wolf" form, not their human forms. There is a strategy that can work to reduce damage when killing these for slayer, though. Start the fight with the wolfbane dagger equipped, then when the werewolf's health is low, switch to a different weapon. It will regain some health in the transformation to wolf form, but still be low, and will ultimately cause less damage than fighting as a wolf the entire time.

If a player has less than 50 Defence/Attack/Strength, it is advised to bring some decent food for your level, or visit the bank periodically, as you will automatically regain your health in there. With 50+ combat skills they can be slain with relative ease.

It might be a good idea to bring nature and fire runes for high alching some of the drops, however decent drops are rare. If you run out of food you can make a quick run to your bank or buy moonlight mead drinks from the bar for 5 gp, which heal 440 life points.

The best way to kill werewolves, for lower levels, is to use the Wolfbane dagger. This prevents them from transforming into their werewolf form. Wait until their Human form's LP is very low before switching to your weapon of choice. This decreases the time taken and HP lost due to the low level of the Human form. However, when the human form turns into a werewolf he gains half his life. Once the transformation has occurred, the kill will count towards a Slayer assignment.

Also in the food shop north of the bank, you can use the table as a safe spot to attack a werewolf, Zoja, that constantly spawns and roams in this room. In addition, the general store spawns two werewolves.

Some may choose to enter the bar in Canifis and Range/Mage the werewolves from across the bar tables and stools. This is a safe spot so no food is required. If using Melee, Moonlight Mead can be purchased for 5gp from the barman, healing 40 life points and having no negative effects on other stats.

In addition to this, one may abuse the ability to regain health points in any bank, to allow for both full drop pickups, and healing meaning no food is required.

You can also use a halberd, this is more difficult than Range/Mage so it isn't recommended.

It is possible to "triple hit" a werewolf by first hitting their human forms with a wolfbane dagger, then equipping a dragon dagger and using its special attack as they morph. This causes the initial hit and the special attack to hit at the same time. When using a poisoned weapon in this way (such as a poisoned dragon dagger) the poison damage may also occur at the same time as the initial attack, causing even more damage to be caused early on in the fight.

It is possible to "double hit" without a special attack by clicking attack just before they transform. Combined with the additional automatic attack, you will hit two strikes in rapid succession. This is also possible if you click during the transformation, but timing difficulties make this less effective.

Canifis can be used as a respawn hub. Therefore, a player could train on werewolves with no food or prayer. When the player dies, he or she can respawn in Canifis and pick up any dropped items quickly.

In the quest Darkness of Hallowvale, two werewolves are found to have passed the holy barrier of the River Salve at Paterdomus, abducting stray travellers for the vampyres. In the novel Betrayal at Falador, werewolves made it all the way into Asgarnia.

Werewolves are one of the 'races' who have champions of champions in the Champions' Challenge activity. It is not currently possible to fight the werewolf champion.

Retrieved from "https://runescape.fandom.com/wiki/Werewolf?oldid=18852380"
Community content is available under CC-BY-SA unless otherwise noted.