Humans and Iorwerth elves (prior to Plague's End) 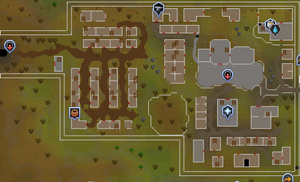 West Ardougne (pronounced "Arr-doyn"[1]) a section of the city and capital of the Kingdom of Kandarin. It is only available to members who are up to a point in the Plague City quest where they can enter. It is well known for once being badly stricken by a mysterious plague, claimed to have been brought into the area on its king's last visit, and also for the Underground Pass. Its neighbour, East Ardougne, is in nature opposed to that of West Ardougne as it is an extremely wealthy and popular area. Although West Ardougne was governed by King Tyras, he left the city just before the "plague" struck to explore the forests of Tirannwn. He was a widely disregarded king and the day-to-day running of the district in his absence was left in the hands of an inefficient and drunk city warder, Bravek. Mourners from East Ardougne sent by King Lathas patrolled the streets and detain anyone that is affected by the false plague. They then took victims to the tunnels underneath the city to work for them as slaves. After the Ardougne Revolution, the mourners were evicted in place of Knights of Ardougne. The city, now under King Thoros, is still recovering from the damage done through years of isolation and oppression.

There are only a few ways to enter West Ardougne. They are:

There are some interesting places in West Ardougne to explore:

This is just another general store that supplies on normal items. It is operated by Chadwell. The building is located in the south-west of the city. It has decent supplies for a starving city.

A graveyard with a lot of tombstones. Ghosts and Zombies patrol the yard but are quite low-levelled, but make for great role-playing, for you can role-play the plague is real and take cover inside buildings and kill zombies.

The Saradomist Chapel of West Ardougne. It is run by a single priest. You can recharge your prayer points here.

A ruined housing area that acts kind of like a maze. It contains a lot of Men, Women, Rats, NPC children and NPC civilians. A civilian will buy a cat or overgrown cat from the player for 100 death runes (200 death runes if the player has received the Ardougne cloak 1 from the Ardougne Tasks - it is not required to carry or wear the cloak)

The Mourner Headquarters is a building in the north-eastern part of the area, with many mourners around and in it. The building cannot be entered until during and after the Biohazard quest, and even then only part of the building can be accessed. Various later quests in the Elf quest series allow for greater access to the building and to the Mourner Tunnels that have been dug from the basement. The tunnels give access to Dark beasts, the Mourner Tunnels mine, and the entrance to the Temple of Light.

There are no quests to start in West Ardougne but the area is involved with the following quests:

Retrieved from "https://runescape.fandom.com/wiki/West_Ardougne?oldid=23052264"
Community content is available under CC-BY-SA unless otherwise noted.