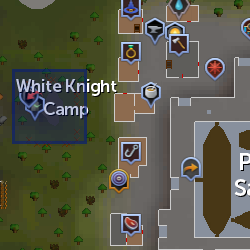 White Knights are White Knight Proselytes found at the White Knight Camp, west of Port Sarim near the entrance to the Grotworm Lair. They serve under Sir Rebrum, whom they seem to hold some amount of contempt for.

Retrieved from "https://runescape.fandom.com/wiki/White_Knight_(White_Knight_Camp)?oldid=24566013"
Community content is available under CC-BY-SA unless otherwise noted.