Wild Weekends were activities held throughout the weekends of May 2012 as a part of Mad May. They were first announced via a news update on the homepage together with the upcoming Mad May event.[1]

Throughout the four weekends of May 2012, different activities were scheduled for each weekend. As with the whole objective of the event, Wild Weekends were intended to be a members-only event, though free players could participate on activities for the second Wild Weekend and the third Wild Weekend in which any player may claim the Barrel of monkeys and Monkey mace.

On the first Wild Weekend, the curled horns, mystic and marauder tattoos on the Squeal of Fortune were relocated to the Uncommon and Common slots, rather than their usual Very Rare placement, significantly increasing the chances of winning the items.

On the second Wild Weekend, the Runespan was offered double points, but not double experience, to all players. Each rune actually kept its original value, however each successful siphon granted the player 2 runes instead of 1, effectively doubling any points gained 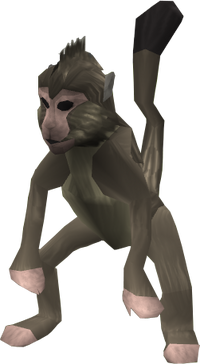 On the third Wild Weekend, Squeal of Fortune introduced and a selection of monkey-themed cosmetics, which included:

The three monkey hats were members-only, and the barrel of monkeys and monkey mace were claimable by all players.[2] To maximise the chances of winning all five items, players couldn't win duplicates of anything except the consumable barrel of monkeys.

The majority of boss monsters on RuneScape experienced double drop rates.[2] Duplicates of dropped items could be encountered (double loot), and certain drop rates were increased, causing almost every boss kill to drop something valuable. The boss monsters affected consisted of :

The drop rate of an ancient effigy, on the other hand, was not affected and thus not doubled.

Chase the Monkey was a Penguin Hide and Seek spin-off that involved monkeys escapees from the Ardougne Zoo instead of the usual penguins.[3] Players who found all 10 monkeys were rewarded the exclusive monkey cape upon spying the last monkey.

The Community Team spawned invasions of level 65 zombie monkeys throughout the weekend at certain intervals.[3] Players who killed at least 5 monkeys on a given day, were rewarded with a medium XP lamp. This activity happened over a 3-day period, allowing a maximum of 3 lamps to be earned.