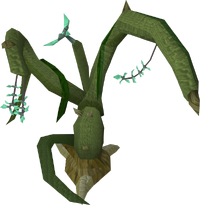 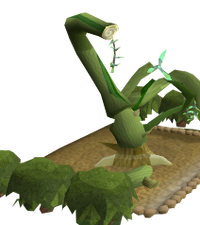 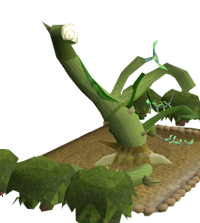 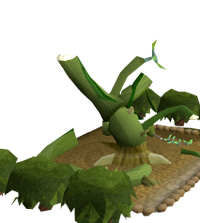 The wild jade vine is a repeatable Farming and Slayer event that was introduced with Back to my Roots. It is grown by planting a jade vine seed next to Horacio's jade vine patch in front of Handelmort Mansion in East Ardougne. If the player does not keep the vine pruned, it becomes a wild jade vine.

The jade vine must be left alone after growing 5 branches. To do this, one must check its health and then wait for about 3 hours more. After that, it turns wild and becomes a level 43 wild jade vine, which players can kill for 2,500 Slayer experience and 650 Woodcutting experience (you gain experience per hit that you deal, 0.1 experience per 1 LP of damage dealt), in addition to the combat experience. It can be repeated about every 19 hours, as that is the time it takes to grow into a mature jade and become a "wild" jade vine.

Alternatively, if players don't want to battle a wild jade vine, they can ask Horacio to dig up the plant just after checking its health. Horacio takes five coconuts and five watermelons as payment to kill the wild vine.

The vine must be damaged with either a hatchet or through melee combat when the player has a hatchet on their tool belt. Dreadnips can also harm the vine. Protection prayers are only partially effective against the vine, because it uses all three combat styles, and can deal up to 936 damage. The vine attack may also inflict a poison that deals around 70 life points a hit, so a dose of super antipoison potion, poison purge aura or an anti-poison totem can be used to defend against it. The vine may also snare the player in its tendrils, stunning them for a few seconds. It is possible to break free from this by using Freedom.

Players can leave via the gate once the battle has begun. However, the vine will still be attacking them (via magic) and may bind them with tendrils as they run. Hence, a one-click teleport can be useful for making an emergency escape, although other teleports can work. 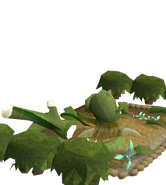 A dead wild jade vine
Click an image to enlarge

Retrieved from "https://runescape.fandom.com/wiki/Wild_jade_vine?oldid=22946063"
Community content is available under CC-BY-SA unless otherwise noted.