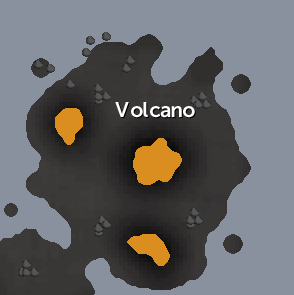 The Northern Wilderness Volcano (marked as 'Volcano' on the map) is a small volcanic outcrop in the members-only section of the Wilderness. Nothing is known about it, as it is not involved in any quests, and currently no NPCs mention anything about it. While walking around it, the ground will shake periodically, probably because of heavy volcanic activity. Like near the Chaos Temple, balls of fire shoot out of the pools of lava. If one hits a player, it can inflict up to 50 damage.

The volcano can be used to flee from the powerful Chaos elemental that resides nearby to the west of the Rogues' Castle. Apart from this, the volcano has no use, except from being a piece of scenery, suited to the hostile landscape of the Wilderness. The north-west side of the volcano has a broken ship with a small cannon on it, some broken barrels and a long-dead crew; however, these have no uses other than for scenery. There is no indication as to the ship age. Next to the ship an extension of the land remains, eight squares of which reach into level 56 Wilderness, the deepest anyone can go inside the Wilderness.

It is also a place that players may have to go to complete their Elite Treasure Trails, as it is possible that their next clue or reward is in the area.

The mysterious wrecked ship in the north part of the volcano.
Click an image to enlarge
Retrieved from "https://runescape.fandom.com/wiki/Wilderness_North_Volcano?oldid=21697718"
Community content is available under CC-BY-SA unless otherwise noted.