View source
watch 02:34
Fire Emblem Warriors: Three Hopes - The Loop
Do you like this video?
Play Sound
OS
Not to be confused with Wilderness North Volcano. 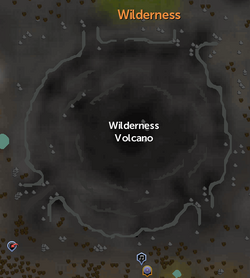 The Wilderness Volcano (formerly known as the Bounty Hunter crater[1]) is a large volcano situated in the centre of the Wilderness. According to Mandrith, the volcano was formed as a scar on the land of Gielinor, as it was the site where the very first murder took place. It is also possible that it was here Zamorak used the Stone of Jas to tear Forinthry apart. The volcano is now home to many monsters, consisting of ankou, skeletons, hellhounds, greater demons and lesser demons. The site used to be a mountain-shaped volcano before the 2011 Wilderness graphical updates.

As of the Wilderness Achievement Tasks update, the volcano plays host to the Sword of Edicts Crater, which has been converted into a rift for Divination. The Cursed Wisps which surround the crater can be converted into energy which can be woven into any other kind of energy.

The volcano is useful for Slayer tasks, as many of the monsters there are commonly assigned, however, since this is located in the wilderness, players run the risk of being attacked by player killers.

It is possible to safe-spot some monsters by using the various obstacles scattered around the volcano. Edmond, the cape seller, can be found to the north-west of the volcano, but may sometimes wander inside.

The volcano is a rare scan location for a Clue scroll (elite). It is also a possible landing site for a shooting star, landing at the south east entrance.

The fastest way to access the volcano is using the Wilderness Volcano Lodestone. Other methods include taking a canoe to the wilderness pond then using one of the northern entrances. Also, using the Earth altar teleport, Varrock Teleport spell or the Edgeville lodestone, running through the Wilderness and using the southeastern entrance of the volcano.

Regardless of the method of travel, players may be attacked by player killers at any time while in the Wilderness.

The volcano was originally used as the location of the Bounty Hunter minigame and as such was named Bounty Hunter Volcano. Mandrith, who was located near a now removed banker at the south eastern entrance, was the custodian of the volcano. He would provide information on the activity for new players, and would also discuss the history of the volcano.

The volcano was originally divided into three craters, each with its own entrance. The craters were designated for low, medium and high level players. All three entrances were located near Mandrith.

Eventually, with the release of Bounty Hunter Worlds, the volcano become redundant as the new Bounty Hunter was to take place over the entire wilderness. According to Mandrith, during this time, the volcano had erupted, which is why his tribe saw fit to close it for the time being. He claimed once things had settled down, they would rebuild the craters for a new purpose.

Eventually, the volcano opened again with the Changes to PvP and Bounty Worlds, and gravestones update on 16 June 2009.[1] The eruption would appear to have carved three new entrances into each edge of the volcano, and attracted several types of monsters. This also resulted in Mandrith leaving his post as custodian of the volcano, in favour of attending to the new Bounty Hunter Worlds in Edgeville bank.

The banker remained at the volcano entrance, and this combined with the Games necklace teleport to the volcano made it a reasonable location for slayer tasks involving the creatures inside, such as greater demons and hellhounds. However, with the return of the Wilderness and Free Trade, the banker was removed and the teleport location changed.

On 13 December 2011, the volcano was drastically updated along with the rest of the Wilderness. With this update came an enormous glowing monolith in the centre of the volcano, inscribed with ancient writing. The Elder Artefact was used by Guthix to banish gods from Gielinor, as shown in The World Wakes. Blue glowing rocks anchored to the ground by chains are also featured here.

In terms of geography, the volcano itself has changed from three different craters to one, shifting from a composite volcano to more of a lava dome style. Because of this, the ground slopes downward toward the centre, meaning players are now free to walk through without having to click on an entryway as before.

On 8 August 2016, the Wilderness Tasks were released. The biggest addition to the volcano was the new Divination rift, and the addition of Cursed wisps. The "Repressed" achievement is an Easy Task which involves depositing 50 memories into the Cursed rift.

The monolith at the centre of the crater

Skeletons can be found surrounding the centre, frozen in the positions that they died in.

Demonic and undead creatures gather around the ruins.