Wilderness Warbands is a dangerous Distraction & Diversion, composed of heavily guarded storage camps of followers of the different Gods. These camps are founded to gain an advantage for the followers of a particular God once their God returns. They will set up camp in the Wilderness every 7 hours, one time at each of the three locations. Quercus, an ancient seer Ent, will send out adventurers to fight in the camps to balance the followers of the different Gods in Guthix's name. Quercus can be found just outside the Grand Exchange agility shortcut. Warband events are synchronised on each world.

The activity was released on 25 March 2013 and was first mentioned in Jagex's special Behind the Scenes post. [1]

As a new camp is set up every 7 hours, the time at which these camps takes place is repeated every week.

You can find the times (UTC) a camp is set up given the weekday:

Players will be notified via a server-wide notice when a Wilderness camp appears. To find a camp after missing the notice, you can talk to Quercus in Edgeville, near the Grand Exchange shortcut. Quercus will also inform you when the next camp is if there is not one currently occurring.

Players can then sabotage the god's beam in the middle of the camp by finding a spot close enough to the beam in a direct line of sight. Succeeding in the sabotage will teleport in allied NPCs to attack the enemy warband, and grants five additional minutes to kill the warband and loot the tents before the camp collapses. Players can intervene in the fight if they choose to, or let the reinforcements finish it. Players should be careful when fighting the warbands, as they use abilities, and the general can execute powerful ultimate abilities, including a variant of Meteor Strike.

Failing results in the whole camp turning hostile without any reinforcements to distract them from attacking players, and only five minutes to clear the camp and loot the tents.

After the general dies, any assisting followers will need to be killed before you can loot the tents. Participating in looting will instantly toggle your single-way wilderness off (into multiway) and tele-block you. Only three out of the five tents can be looted, and players may loot a wand of treachery. This will reset when the player loses or turns in items. There are only 1000 pieces of loot, and players may obtain loot by killing other players. Although players cannot be attacked until they are finished looting, there are no combat level restrictions (that means a level 138 can attack a level 3 player if the level 3 player looted at least 1 item in the same instance). If a wand of treachery has been looted, the game will announce to everybody in the vicinity that a wand has been found, and the player who has looted it will glow for 20 seconds, as well as have their Prayer Points reduced to zero. Only one wand can be found per camp.

While the players cannot teleport with the items in their inventory, if they can make it to Daemonheim, they can be transported out of the Wilderness. They will be brought either to Taverley or Al Kharid. From Al Kharid, run northwest to use the Lumbridge canoe to go to Edgeville.

NOTE: Logging out or disconnecting inside the Wilderness from the server will immediately remove all loot.

Various enemies may be encountered while looting camps. Two of each type of follower is in a camp, and each camp has one general. Attacking them will cause the player to automatically switch to multi-combat (if in single-combat).

Note: All followers are level 120.

(Players of all levels can attack you while participating in this activity.)

Warbands grant experience in a number of skills, depending on which tents are available at the time and which tents you choose to take loot from. Looting from the tents will cause the player to turn into multi-combat way if they are on single-combat.

Reward items are also looted from the tents in the camps in the Wilderness. Several different items may be acquired:

You can loot a total of 25 supplies per camp before you have to go to Quercus to turn them in. Looting a Wand of treachery will not count towards the limit. You can loot from 3 camps every day, resetting at midnight UTC. Even if you are killed and lose everything, your attempt will still count as one of the three. You can return to the same camp, however, to try again without penalty. This means that you can loot a maximum of 75 items per day, but only if you manage to get the maximum of 25 from every camp. Once the items are looted, players are tele-blocked and must walk/run back to Quercus to exchange them for a XP reward associated with the items.

is given for s supplies handed in, where l is your skill's level).

The supplies can also be handed in for 4,000 coins each, totaling 300,000 coins per day if all camps are looted. If a player manages to kill someone with supplies in the Wilderness they can pick them up. The supplies can be given to Quercus for either experience in the skills the supplies belong to or 4000 coins for each item. Since skills like smithing and farming are considered expensive skills to train (fast) trading in supplies for XP is by far the most common option especially since the coin value is significantly less than the XP is worth (based on coins per xp in those skills).

If you are killed or try to hop worlds then your supplies are automatically dropped.

Concept art of the Saradominist sergeant.

Concept art of the Armadylean myrmidon.

Concept art of a Saradominist bandit.

Concept art of a Bandosian bandit.

Concept art of a Armadylian bandit. 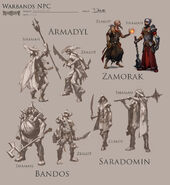 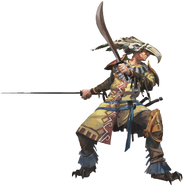 Retrieved from "https://runescape.fandom.com/wiki/Wilderness_Warbands?oldid=11399275"
Community content is available under CC-BY-SA unless otherwise noted.