This is the current revision of this page, as edited by PiscinePanzer (Message Wall | contribs) at 21:13, 10 April 2019. The present address is a permanent link to this version.
Revision as of 21:13, 10 April 2019 by PiscinePanzer (Message Wall | contribs)
(diff) ← Older revision | Latest revision (diff) | Newer revision → (diff)
View source
"Woodcutting tutor" redirects here. For the woodcutting tutor involved in Troll Warzone, see Will Oakfeller.

A chip off the old block. 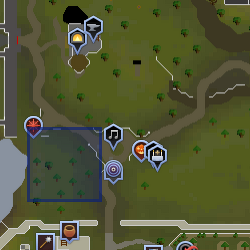 Wilfred is a non-player character who is found among the trees north-west of the north Falador gate in a members world. He sells the Woodcutting cape along with the hood (for 99,000 coins) for Runescape members who have achieved level 99 in Woodcutting.

Wilfred will also help you find the location of the crystal tree.

In Issue 36 of Postbag from the Hedge, Wilfred explains the dangers of using a cursed magic hatchet:

Before the Advisors and Objectives update on 18 September 2009 Wilfred was known as the Woodcutting Tutor and was positioned in Lumbridge. He had various functions beside selling skillcapes: