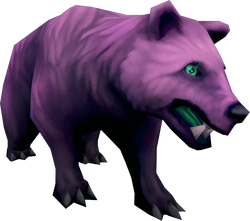 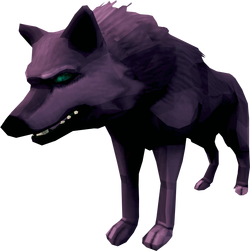 The Witch's experiment is a shapeshifting monster fought during the Witch's House quest. It has four forms, each of which must be fought consecutively, and each of which use Melee and have no drops.

Its forms are a level 16 Chicken, a level 23 Spider, a level 37 Bear, and finally a level 49 Wolf, each of which are purple and green recolours of the respective monsters.

Once you have defeated it, you may retrieve the ball. The experiment is described by Nora T. Hagg in her diary, where it appears to have been akin to a pet for her, as she is both angered and sorrowed at the loss of her precious "Fritz".

Retrieved from "https://runescape.fandom.com/wiki/Witch%27s_experiment?oldid=21916585"
Community content is available under CC-BY-SA unless otherwise noted.