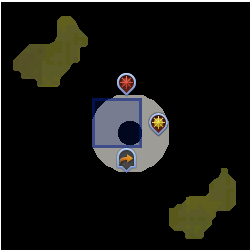 Wizard Acantha is a member of the Runecrafting Guild. She is also the leader of the green team in The Great Orb Project minigame. Players may speak to her to join her team.

The Great Orb Project minigame follows the premise that, when the Runecrafting altars are used, some of the energy in the transfer to the rune essence is lost and then manifests as yellow or green orbs in the surrounding area. Wizard Acantha is of the opinion that green orbs are, as opposed to the yellow orbs, the energy in the rune altars that supply magic. Because of this, she believes that the yellow orbs are useless byproducts that would ultimately pollute the altars.

Wizard Acantha also attended the 2011 Christmas Event Banquet. She is in her own chair instead of the set chairs for everyone else. Wizard Acantha sits next to Bogrog.

Retrieved from "https://runescape.fandom.com/wiki/Wizard_Acantha?oldid=24563604"
Community content is available under CC-BY-SA unless otherwise noted.