The hat is a dead give away. 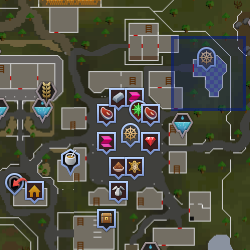 Wizard Cromperty is a wizard-inventor living in the northeast corner of East Ardougne. He has a very friendly attitude and uses a somewhat comic manner of speaking. He also tends to start thinking about different inventions during dialogues (quests dialogues that is) and forgetting about the player presence, giving an absent-minded attitude.

While having two jobs, he creates magic inventions. His best invention to date is his patented pending teleport block, a pair of blocks teleporting the user from one block to another. Hoping to demonstrate it to the staff at the Wizards' Tower, he sent the package to the RPDT Postal Service to deliver it. The package is never delivered and the player can interchange the address label of the crate in the RPDT depot with one of Lord Handelmort's packages during the Tribal Totem quest.

Wizard Cromperty can teleport players to rune essence mine and talk about his invention, bragging a little on the matter. He is involved in the Tribal Totem quest as indicated above. It is also possible to involve him in the Abyss miniquest by teleporting the player at the rune essence mine, imbuing in the process the Scrying Orb for the Mage of Zamorak. He also plays a role in the One Small Favour quest to create an animate rock scroll to rescue Petra, trapped in a rock wall in the Goblin Cave near the Fishing Guild. He is also present in the King's Ransom quest to release King Arthur from imprisonment in a rock statue in the basement of the Black Knights' Fortress. Finally, he is in the Back to my Roots quest, asking the player to check his parcel at the RPDT depot. Unintentionally, Cromperty starts the Returning Clarence miniquest by finding his severed hand in the parcel.

Retrieved from "https://runescape.fandom.com/wiki/Wizard_Cromperty?oldid=24562388"
Community content is available under CC-BY-SA unless otherwise noted.