She is in charge of the Runecrafting Guild. 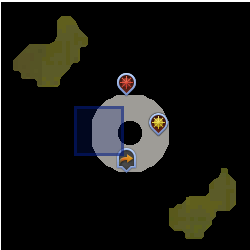 Wizard Elriss is the head of the Runecrafting Guild and renowned scholar in the field of magic and runecrafting. Apart from managing the guild, she is also its shop owner, selling goods in exchange for runecrafting guild tokens to those who have earnt them in the guild. She is the former girlfriend of Movario, an arcane sorcerer and researcher.

Elriss is not only the guild's founder, manager, and store-owner, but also an esteemed magical theorist and researcher. Perhaps her most significant research partains to an ancient artefact known as the Eye of Saradomin, an object which she believes is the origin of runes and magic. She has hidden this theory for years, although she will share some of her findings if one speaks to her while wearing an activated ring of charos.

Wizard Elriss is among the most well-established of the Runecrafting Guild's number, responsible for creating the guild after the events of the Rune Mysteries quest in the Year 169 of the Fifth Age. Elriss created the guild in the "shadow" of the original Wizards' Tower, a pocketed area of space that functions in much the same way as the runecrafting altars.

Elriss's most revolutionary research regards an ancient artefact that, according to a number of the Tower's ancient texts, created rune essence. This Eye of Saradomin is, in fact, the Stone of Jas, a relic of the Elder Gods which Guthix used to create much of Gielinor's life and magic. After being hidden by Guthix at the end of the Third Age it has since faded into obscurity, and Elriss is among the scant few both aware of its existence and still searching for it.

After years of research and planning, Elriss believes she is getting close to locating this object, which she claims gives off a powerful magical resonance. She elaborates on her method of locating the power, if persuaded with the ring of charos by players wearing a full set of Runecrafting Robes. Apparently, she is somehow using the energies of the rune altars to triangulate a rough target location.

Her estranged ex-boyfriend Movario was also searching for the artefact, spurring her to greater speeds and efforts. Unbeknownst to her, he found it while in the service of Lucien, who took it for himself. Unable to persuade his master to allow him to research the Stone, Movario left the Mahjarrat and is now investigating the remnants of the Stone's power near the ritual site.

Elriss is still searching for the Stone of Jas, but while she does, she continues to manage the Runecrafting Guild.

Elriss runs a large shop stocking many runecrafting and magic-related rewards for the Great Orb Project minigame. These include all existing Runecrafting talismans except death and blood talismans, teleportation tablets that take players to the various runecrafting altars, runecrafting robes of varying types, runecrafting staves, and pure essence.

If a player gives her all 13 Runecrafting talismans or tiaras (she does not take them, and a mix of both works), or shows them a wicked hood with all the talismans consumed, she will give the player an omni-talisman, as well as a one-time 13,605 Runecrafting experience.

Retrieved from "https://runescape.fandom.com/wiki/Wizard_Elriss?oldid=24563603"
Community content is available under CC-BY-SA unless otherwise noted.