A wizard. Apparently he's into portals. 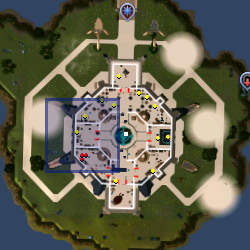 Wizard Isidor is a teleport specialist[1] located on the 1st2nd floor[UK] of the Wizards' Tower. His work with magic has affected his memory, leaving him incapable of remembering things like incantations, often having to be reminded.[2] He is an acquaintance of Explorer Jack.[2] Isidor featured in the 2011 Christmas event and its return in 2016.

He can teleport adventurers to the Land of Snow once he is reminded of the spell Ectosum glissendo, though he refuses to allow anybody through with a sled due his phobia.[3] He is the inventor of the snow emitter, a portal-based magical device that sucks moisture from the air then freezes it in an arctic plane.[4] He used the device when the Wizards' Tower held A Towering Feast to make the tower's basement, the location of the feast, more festive by covering it in snow.[5]

Retrieved from "https://runescape.fandom.com/wiki/Wizard_Isidor?oldid=24563725"
Community content is available under CC-BY-SA unless otherwise noted.