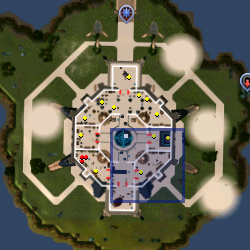 Wizard Mizgog is a stuttering and clumsy wizard found on the 1st2nd floor[UK] of the Wizards' Tower and the start point of the quest Imp Catcher.

In general, he seems to be rivals with Wizard Grayzag, who is across the hall. A keeper of magical trinkets, he is often bullied by Wizard Grayzag, a devotee of slightly 'grander' and more destructive magics. Trying to keep to himself won't work as across the hall, Grayzag is always plotting another nefarious scheme against him. When asked whether he could teach the player "any interesting spells", a surprised Mizgog will reply that he does not think so, as he says, "The type of magic I study requires years of meditation and research."

During the Wizards' Tower Robbery (part of Love Story), Mizgog immediately fled after Zenevivia who cast a blood spell on him. He later revealed that he is at the Tower to study and is not a battle mage.

During the Cryptic Clue Fest III, a number of runes must be brought to him, as he needs them for a new type of magic he is developing; "beadromancy", in which one derives his power from beads. He is a self-proclaimed 'beadromancer', having come to the tower to study the "mysteries of the universe" using beads, much to the dismay of Wizard Grayzag and Wizard Taloram.

Mizgog is in possession of four magical beads, but Grayzag stole them from him. Giving them to some of his imps, he sent them all across Gielinor to hide them. You can help Mizgog get them back by killing imps, who might randomly drop each of the four beads. An alternative way to gain the four beads would be to buy them at the Grand Exchange, though doing so may cost more than 15,000 coins. If you can return all four beads to Mizgog, he will reward you with an Amulet of Accuracy.

After the quest you can buy more Amulets of Accuracy from him for 5000 coins.