A skilled hydromancer, one of the few of her kind. 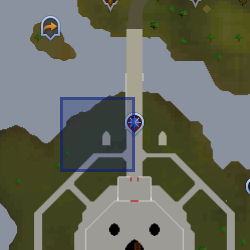 Wizard Myrtle is a skilled hydromancer who is visiting the Wizards' Tower, located by the fountains near the entrance of the Tower. Ironically, she suffers from hydrophobia,[1] but dislikes it when people mock her for it.[2] She used to be the apprentice of Terrova, a wizard on Tutorial Island.[3] However, they lost contact when the island sank[3] and she wanted to see if she could find out what became of the island's residents, creating a spell for the task.[4]

She requested the aid of a passing adventurer, asking them to locate the only known survivor of the island, the combat instructor Vannaka. The adventurer found Vannaka in the Edgeville Dungeon where he is now a slayer master, and brought him back to the Wizards' Tower. Myrtle and Vannaka developed feelings for each other and flirted for a while. The adventurer and Vannaka then dove to the island from Mudskipper Point. She later joined them when Hector Vivian revealed himself, apparently allowing her rage to override her fear of deep water.[5] She fought Hector, who summoned crassians to attack her. The adventurer was tasked with keeping the crassians off her and aiding her with the spell when they could. After defeating and trapping Hector on the island, she offered to transport the adventurer back to the island whenever they requested.

She also acts as a bank deposit box via her right-click option.

Retrieved from "https://runescape.fandom.com/wiki/Wizard_Myrtle?oldid=24565494"
Community content is available under CC-BY-SA unless otherwise noted.