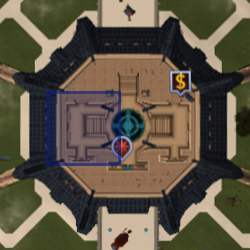 Wizard Rinsit is a Wizards' Tower apprentice who is there to share knowledge of the Runespan with others. He can be found on the roof of the Wizards' Tower.

He also owns a store called Wizard Rinsit's Runecrafting Shop, which sells various rewards from training in the Runespan.

Using the Rusty chest on Wizard Rinsit in the Wizards' Tower will prompt the player to ask for help unlocking it, which he will do, allowing the player to get the Magical feather.

Retrieved from "https://runescape.fandom.com/wiki/Wizard_Rinsit?oldid=23002303"
Community content is available under CC-BY-SA unless otherwise noted.