Wizard Taloram succeeds Wizard Grayzag after the player completes The Void Stares Back. He is found on the 1st2nd floor[UK] by the lesser demon's cage.

Prior to the Wizard Tower update in 2012, he only appeared in the final cutscene of Love Story, in which the Wise Old Man and Zenevivia attack the Wizards' Tower. He summons imps to help defend the tower, but they are swiftly dispatched by Zenevivia's attack. He teleports away from the fight afterwards. 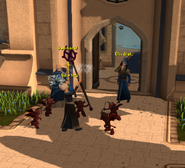 Concept art of Taloram's face.
Click an image to enlarge

Retrieved from "https://runescape.fandom.com/wiki/Wizard_Taloram?oldid=24564111"
Community content is available under CC-BY-SA unless otherwise noted.