Wields incredible arcane power, if he could remember where he put it. 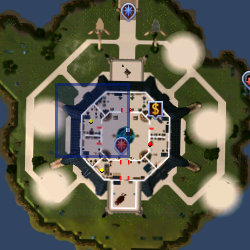 Frederic Traiborn is a peculiar wizard who resides on the 2nd3rd floor[UK] of the Wizards' Tower. He often addresses people as "thingummywuts" and claims to see these indescribable creatures everywhere, claiming they cause minor havoc in the tower. Despite these seemingly mad theories and his goofy look, Traiborn is one of the Senior Wizards of the tower, along with Wizard Ellaron and Wizard Borann, and possesses considerable magical skill. He has an apprentice called Jalarast. He is included in the quest Recipe for Disaster.

His first name - Frederic - was revealed by Jagex, along with the fact that he is "very sensitive about his first name and often does not tell others what it is".[1]

Traiborn indeed appears to possess more power than anyone, even the player, might suspect. He is described as "a strong magician" on his entry in the Jagex website, being key to the completion of two of the most famous and important RuneScape Quests as well as playing minor roles in Defender of Varrock and Love Story, and having such magical proficiency that even the extraordinarily powerful and experienced Wise Old Man hesitates to launch his planned assault upon Wizards' Tower. The Wise Old Man even stated himself, in the 12th Postbag, that "the powers of Wizard Traiborn are not to be underestimated" and that thus he doubted he will make a move for "a considerable time." His fears come to fruition in Love Story, as Traiborn thwarts his invasion with the aid of an actual, albeit unseen, thingummywut he'd summoned, although he later forgot he did so.

During Rune Mysteries, Traiborn reveals that he saw a magical vortex ascend into the tower from below through its central power beam, which leads an adventurer and Ariane to the conclusion that the vortex, which had attacked Wizard Borann in the library minutes before, had come from the ruins of the first Wizards' Tower, sealed by Archmage Perien. Traiborn is later seen casting Icyenic Purge with other senior wizards in an attempt to cleanse the power beam of the vortices, much to Ariane's concern.

Retrieved from "https://runescape.fandom.com/wiki/Wizard_Traiborn?oldid=24562257"
Community content is available under CC-BY-SA unless otherwise noted.