Start a Wiki
CSOS
This article is about standard wolves. For other wolves, see Wolf (disambiguation).
Level 16Level 23Level 42
? (edit) 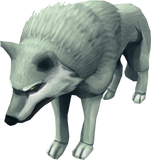 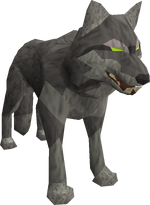 Their bones can be used with a chisel to create Wolfbone arrowtips used to make Ogre arrows, which are necessary for completing Big Chompy Bird Hunting and Freeing Skrach Uglogwee during Recipe for Disaster. The bones are also used to summon spirit wolves, so it can be profitable for free players or members to kill wolves for their bones.

Retrieved from "https://runescape.fandom.com/wiki/Wolf?oldid=22740125"
Community content is available under CC-BY-SA unless otherwise noted.