The World map interface is a large, scrolling map of the entire surface of Gielinor. On the map are the names of cities, towns, islands, kingdoms, mountains, caves, dungeons, rivers, lakes, and countless other geographic features as well as information icons for specific locations, buildings, and quest starting points. After an update, Unknown was removed from the World Map.

To access the World Map, the "World Map" button located on the Minimap must be clicked. Doing this will change the game screen into the World map view. World map view cannot be accessed during combat nor certain other activities. This version of the map is dynamic. Players can search it using keywords, quickly move from one location to another one, view the "Key" list where all of the icons are explained and can be clicked to reveal all of the locations of the certain icon. The dynamic map may also be zoomed, depending on the player's preference.

As of 9 November 2009, other players can now see that you are busy looking at the world map. While the map is displayed, your character will appear to be looking at a scroll of parchment, presumably containing a map on it. This should prevent other players from assuming you are paying attention to them.

The World map, once loaded, will show the current location of the player. With the 7 October 2009 update, players can now scroll using the arrow keys, instead of having to click and drag using the mouse though dragging the mouse can still be used to browse throughout the world map.

The "You are here" feature was added on 27 January 2009. It shows the location of the player on the map. While looking at another part of the map, the "You are here" arrow can be left-clicked to scroll automatically to the current location.

The yellow marker is also used on the advisor system when doing any of the tutorials or when plotting an arrow to a nearby enemy/quest start.

You can turn this marker off.

A quest start point can be selected to be shown on the World map by right-clicking the quest name and selecting "Show on the World map" or setting the quest as your objective. The starting point of the quest (if it starts in a dungeon, the dungeon entrance) will be shown as a cyan arrow similar to the "You are here" one. The quest name will become cyan, and the arrow is kept until logout, choosing another quest or switching it off (right-clicking quest name). This was removed from the game. However, if you set a quest as your objective, the Quest Starting Point icon will appear on the world map. Unlike other markers, the quest start marker does not glow and clicking on it will not centre the map to it, the text of the quest start marker uses a different font and colour. However, if you plot an arrow to the quest start, the marker will become yellow and will be able to be centred, just like any other markers.

Players can also set markers on the world map for easier travelling. Double clicking a spot in the map will set a marker, and a blue arrow will appear on the minimap. When the marker feature was released, the only way to remove a marker is to click on the legend tab (The "?") and press "Clear your marker" or right-click on your marker and press the clear your marker option. However, on the 25th August 2010, JaGex released an update along-side the release of the Conquest minigame. This update helped if you already have a marker on the world map, by allowing you to remove it quickly by right clicking on the globe button and selecting "clear your marker".

If you have died recently and have a gravestone, there will be a mark on the world map similar to the "You are here" arrow.

It is possible to have up to 5 markers at the same time on the world map, this can be done by setting a quest as an objective, placing a custom marker, turning on "You are here", having a gravestone, and starting a tutorial/plotting an arrow to nearby enemy using the advisor. Plotting an arrow to a quest start will replace the blue quest marker with a yellow marker allowing only 4 markers to placed.

On the 27 May 2009 Jagex released maps of many dungeons. To use this, you can select a Dungeon from a drop down list at the bottom of the map or click on the entrance to a dungeon on the world map. After doing so, the surface of Gielinor would disappear, and all left on the map is an underworld consisting solely of dungeons. You can view other dungeons even if the entrance you clicked is not linked to your target dungeon in any way. However, some dungeons are not on the map.

The Zoom button is used for zooming the current World map view. To obtain a wider or a more detailed view, the map can be magnified accordingly. There are five zoom buttons available: 37%, 50%, 75%, 100% and 200%. The 100% zoom level corresponds to the zoom level of the player's minimap.

To search for a location within the World map, the "Search bar" can used to type-in keywords. This is located at the bottom of the World map, next to the Key button. As words are typed, suggested locations are displayed within the Search bar.

The Overview button, located on the far right-hand side, is used to show a minimap showing the entire RuneScape world. The area shown on the World Map is highlighted in a red square.

This red square can be clicked and moved to quickly move around the World Map. This minimap can be useful in conjunction with the Key button, as yellow circles will also flash in this minimap even when these circles are not flashing in the current World map view.

The Help button can be accessed at the top-right corner, providing a short tutorial for the features of the World Map. This offers information about exploring the map with mouse keys, how the key list functions, where other maps can be found, using the search bar, as well as placing map markers. 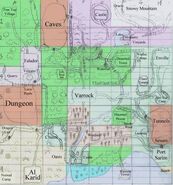 The very first map ever made of RuneScape, by then called DeviousMUD 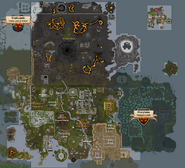 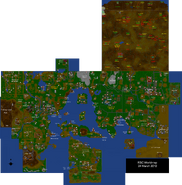 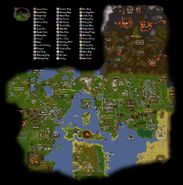 The map inside of the Betrayal at Falador book. 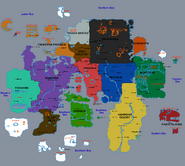 A map showing all different regions of Gielinor

Historical versions of the world map can be viewed here.