Goblin Diplomacy; Land of the Goblins 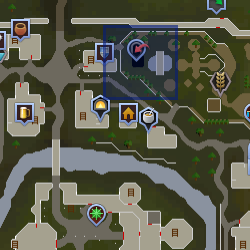 Wyson the gardener is the head gardener of Falador Park. Players may purchase woad leaves from him, which can be used to make blue dye with the help of Aggie the witch in Draynor Village. He will also trade mole pieces for bird's nests.

Due to an accident with Malignius-Mortifer's-Super-Ultra-Flora-Growth-Potion, Wyson's attempt at producing larger than normal plants for the park backfired and increased the size of a pregnant mole in the garden, creating the giant mole. Wyson stays near the large plants created by this event to tell and warn adventurers about the mole, and suggests to those seeking a combat encounter to try and battle it.

Wyson will exchange the skins and claws the giant mole drops for bird nests; the nests may or may not have seeds. Wyson will accept only un-noted mole skins and mole claws. For players who have completed the hard Falador Tasks, he will also give them a white lily seed with each nest for each moleskin (not claws). For players who have completed the elite Falador tasks, the mole will also drop a mole nose which can also be sold to Wyson in exchange for a more valuable bird nest (though they only contain rings or tree seeds).

Trading your collected mole skins and claws will turn a profit, as a crushed nest is worth about the same as either of the mole items; and there is also the added profit from any contents of the nests. These can range from low-level seeds to seeds with values of over 100,000 coins. If one would prefer direct cash for the drops, the skins and claws can simply be sold on the Grand Exchange, for roughly the same amount one would sell the resultant nest for.

When attempting to purchase woad leaves from Wyson, players have four options on price for barting; 5, 10, 15, or 20 coins. If offered 5 or 10 coins, Wyson will not choose to sell the player any leaves. If offered 15 coins, players will be able to purchase a single leaf. Offering 20 coins will allow the player to get two woad leaves, as Wyson will consider this a generous offer.

Retrieved from "https://runescape.fandom.com/wiki/Wyson_the_gardener?oldid=24562178"
Community content is available under CC-BY-SA unless otherwise noted.