• An impressively hairy ape-like creature.
• He's unconscious. That horn must have given him quite fright fright!
• He's sleeping like a baby. 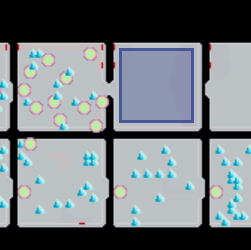 The Yeti is featured in the Myths of the White Lands quest, released with the 2008 Christmas event on 16 December 2008. Players have to complete a series of puzzles to get into the Yeti's final room. However, to obtain the stones (the 'riches' that Explorer Jack seeks), the Yeti has to be subdued.

To do this, players have to travel back a couple of rooms and access the upper level. Once at the upper level, players need to return to the Yeti's room, and blow a pipe. This knocks the Yeti unconscious, and once the Yeti is asleep, players will be able to acquire the stones for Explorer Jack. If a player does not do this, the Yeti shouts and shakes the cave, forcing the player back out its lair.

During the quest, it is an NPC, and has yellow text when examined. After the quest is completed, he becomes a piece of interactive scenery, its examine text becoming blue.

Yeti dung has a horrible stench, and acquired during the quest in the form of stones and enchanted stones.

It is unknown whether this Yeti is the same as King Vargas and the Yetis encountered during and after Glorious Memories in being a human transformed by the spit of a Gnoeals, but it looks very similar to them and has a similar knockback attack to the Yeti Nial Swiftfling so conceivably could be.

Retrieved from "https://runescape.fandom.com/wiki/Yeti_(Myths_of_the_White_Lands)?oldid=24563658"
Community content is available under CC-BY-SA unless otherwise noted.