Yew trees are one of a variety of trees that are interactive scenery found in various places. Players with level 60 Woodcutting can chop a yew tree to obtain 175 experience and yew logs, which are used in Fletching or Firemaking. The respawn rate of 1 yew tree is 1 minute and 29 seconds. As with all trees above normal trees and achey trees, yews can yield multiple logs when chopped. Yew trees are marked with a rare tree mark on the mini-map.

One of the best places to cut yew trees in free-to-play is in behind Varrock castle, where three yews can be found. After you have cut a full inventory, it is advised that you run to the Grand Exchange, deposit your logs at the bank, and then run back. This can prove to be a very efficient way of gathering yew logs.

For members, one of the best spots is the yew grove west of the Catherby bank due to a close bank and a high number of trees. If one completes the Legends' Quest, the Legends' Guild bank becomes usable. The three yew trees just outside the guild are rarely cut, making for fast cutting and efficient banking. Another good place to chop yews is in the Tree Gnome Stronghold, because of the nearby spirit tree teleport to the Grand Exchange. Another common place to cut yews at is Melzar's Maze, as you can set your house at Rimmington, teleport there, and then, when your inventory is full, use the explorer's ring's cabbage teleport to get back to Draynor. Another good way to do this is to bank at the deposit box in the customs office in Rimmington (shows up as "locker" in game), but you can only do so if you have started the quest Rocking Out. Finally, another good place is in Seer's Village, next to the Camelot castle. There are four yew trees, and a bank nearby.

Upon completion of the Swan Song quest players can fairly economically visit a patch of 9 yew trees starting just south of Kathy Corkat curving around the north side of Eagle's Peak. From the Piscatoris Fishing Colony bank, one can visit Kathy and she will row you down the river to the yew trees. Once you have a full inventory of logs, take the boat back to the Piscatoris Fishing Colony and bank. Upon completion of the Deadliest Catch quest this becomes the fastest and best place to cut yews with a deposit chest only a couple of clicks away to the north. A trip in one direction takes about 36 seconds from bank to cutting the tree, so though it provides an uncrowded and plentiful grove of yews other methods such as the Edgeville or Catherby yews may be faster.

The choppable yew tree found in the elven city of Prifddinas

The stump of a yew tree 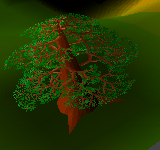 A yew tree in Runescape Classic
Click an image to enlarge

Members can grow a yew tree by planting a yew seed in a plant pot and watering it, waiting for it to grow into a sapling, and using the sapling on a tree patch at level 60 Farming. Players will gain 81 experience for this, and 7070.7 experience for checking the tree's health when it has fully grown. They can also be used as a tree which only you can see, making it possible to cut freely without any outer interference. A gardener will require 10 Cactus spines as payment to look after your planted yew tree. Cutting down a yew or magic tree is a hard task in the Falador Tasks. You may also pay the gardener 200 coins to destroy the tree. This tree currently takes 400 minutes, or 6 hours 40 minutes, to grow.

An ideal place to plant yew seeds is in the tree farming patch in the Tree Gnome Stronghold as it is near both a bank and a grove of yews that may be cut while waiting for it to respawn.

Retrieved from "https://runescape.fandom.com/wiki/Yew?oldid=24309102"
Community content is available under CC-BY-SA unless otherwise noted.