A nice sturdy bow made out of yew.
Loading... 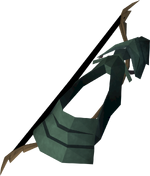 Players can make a yew shieldbow through the Fletching skill at level 70. First, a player must cut an unstrung yew shieldbow from yew logs, earning 75 Fletching experience. The unstrung bow is then strung with a bowstring, for an additional 75 experience.

It incorporates a shield inseparably in its design and, as a result, it provides armour and counts as a shield for Defence abilities, such as Rejuvenate. The attack range of the yew shieldbow is 8 spaces.

Retrieved from "https://runescape.fandom.com/wiki/Yew_shieldbow?oldid=24533734"
Community content is available under CC-BY-SA unless otherwise noted.