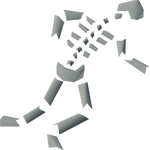 The Zadimus corpse is a quest item that is obtained during the Shilo Village quest by searching an ancient gallows in the temple of Ah Za Rhoon. The corpse must be given to Trufitus in Tai Bwo Wannai village. Afterwards, it must be buried next to the tribal statue in the middle of Tai Bwo Wannai. The Spirit of Zadimus then appears and gives the player the key to Rashiliyia's tomb.

Though it cannot be dropped, the Zadimus corpse can be lost upon death or alchemised using Magic for 0 coins. Simply search the gallows again to reclaim it.

Burying the corpse does not give any prayer experience.