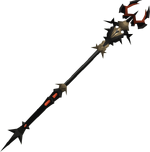 Zamorak croziers are part of the Vestment set and can be found by doing level 3 treasure trails. To wear one the player needs at least 60 Prayer. The crozier is worn as a staff in the weapons slot.

Retrieved from "https://runescape.fandom.com/wiki/Zamorak_crozier?oldid=24535886"
Community content is available under CC-BY-SA unless otherwise noted.