View source
watch 02:56
Raise a Floppa - The Loop
Do you like this video?
Play Sound
RSCOS 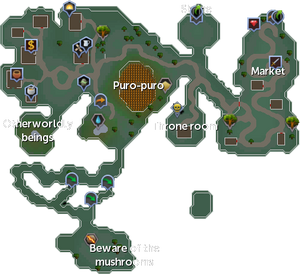 The Kingdom of Zanaris is a strange plane rumoured to be the nexus of all planes.[1] It is inhabited by small winged creatures known as fairies, and according to the Guthixian Memories, it was in Zanaris where Guthix saw Gielinor for the first time. The normal laws of physics and logic do not apply on Zanaris; for instance, animals can talk and plants require no nutrients or sunlight to grow, and emit a faint glow.[2] Being described as an 'intersection of worlds', Zanaris is the epicentre whence the weather and seasons of Gielinor are governed by the fairies. The realm is apparently located on Gielinor's moon.

According to the co-ordinator, Zanaris is 'an extremely old place, it was here long before we fairyfolk came to live here' with many dormant magical properties, such as those of 'the ability to jump between planes using a powerful portal' that had been sealed for centuries, but the Fairy Queen harnessed the magic and used it to create the network of fairy rings, though not as powerful as the portal, the World Gate, would have been.[3] This property of being a nexus of planes places it under threat from other realms. Recently, it was invaded by orks from Orks Rift but not without help of the malicious Fairy Mafia. Conversely, Zanaris is famous for its market, where various items from other worlds are sold, an example being a selection of dragon weapons from Freneskae supplied by the Consortium of Extra-Planar Merchandise Transferral Specialists.

Access to Zanaris is granted after the Lost City quest has been completed. It is therefore only accessible by members.

A player entering, then exiting, Zanaris using the shed in Lumbridge Swamp.

Players initially access Zanaris by wielding a Dramen staff or Lunar staff and entering the small hut in Lumbridge Swamps to the east of the Lumbridge Swamp Dungeon entrance.

While doing the quest Fairy Tale II - Cure a Queen, they will be able to use the fairy rings as a travel method, provided that they wield a Dramen or Lunar staff.

It can also be accessed by travelling to the Cosmic Altar via the Abyss, by teleportation tablet, with a wicked hood imbued with a cosmic talisman or by using a Portable fairy ring.

North of the bank is a fairy healer, named Fairy Nuff (a pun on "Fair enough"). She will heal you if you give her gemstones. The rarer the stone the more she will heal you. She will not heal you when she is in the Fairy Resistance Hideout or after Fairy Tale III quest

The main fairy ring is located south of the water fountains, and west of the farm field. Entering any other fairy ring in RuneScape brings a player here. Activating the ring while carrying a Dramen staff or lunar staff will open a combination window to enter a code to go to other fairy rings elsewhere in RuneScape.

The other two original fairy rings in Zanaris are exit rings only:

There is a bank in Zanaris, just north of the general store.

The market area lies to the east of Zanaris and costs 1 cut diamond to access unless players have completed Fairy Tale III after which it is free.

Jukat sells dragon daggers for 30,000 coins, and dragon longswords for 100,000 coins, although buying them from the Grand Exchange is much cheaper.

The ruby ring trader Irksol has up to 10 ruby rings in stock, and is located near the gem icon to the north.

Lunderwin will pay 100 coins for each un-noted cabbage. Sacks of cabbages cannot be brought into the market place.

There are two yew trees for woodcutters.

Finally, the exit from the market is to the northeast of the market area; there is a fairy ring that leads to behind Al Kharid's bank.

The Cosmic Altar lies to the south of Zanaris. There are two Agility shortcuts that allow faster access, one requiring 46 agility for the medium shortcut, and 66 agility for the advanced shortcut.

Near the wheat field inside the city are several talking cows that are reasonably close to the bank. These may be useful for Crafting. South-west of the field are three talking sheep. They can be sheared by right-clicking on them and selecting 'Shear Sheep', producing wool.

There is also a sandpit, which is used in glassblowing. If players have Seaweed, there is a Range to the south and a furnace to the north that may be useful for making molten glass at the same time as collecting sand.

There is a grain field and a nearby windmill, so flour is easy to make here. There are also several fountains for collection of water, though these are by no means the closest water sources to a bank in the game. There is also a cooking range to the south of the bank, near which a chocolate bar can be found.

Among the cows near the wheat field is a dairy cow, and in the mill there is a dairy churn. Combine that with the bucket spawn near the mill and the nearby bank, and all the requirements for making butter, cream and cheese are present.

Chaeldar is the fourth hardest Slayer master, and requires a minimum combat level of 75 to begin assigning tasks to players. She gives out a lot of metal dragons, but otherwise her tasks can be very rewarding.

Impetuous Impulses is a minigame in which players catch implings in the realm of Puro-Puro, which can be accessed via the crop circle in the centre of the wheat field. A Wandering impling flitters about nearby to provide a brief introduction to the minigame.

Zanaris has had three major graphical updates. The realm was first updated in 2006; before this, it was a simply a cave underground. It was then updated to have a bluish appearance. On 13 May 2010, Zanaris was upgraded to its current appearance.

Jagex had announced prior to the current graphical update in a series of blogs that they would once again be updating the appearance of Zanaris. The first blog was released on 17 April 2009.

The fairies were also graphically updated along with the Zanaris improvement on 13 May.

A short clip of Zanaris could be seen in the Mod Fetzki: iCould video at approximately 00:43 seconds in before May the thirteenth.

The unique plant life of Zanaris. 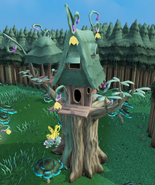 The wallpaper of Zanaris found on runescape.com

Concept art for the planned remodelling of Zanaris.

Zanaris as seen from the island Ashdale at night.

A player is turned into a pig by the fairies' magic.

The Zanaris choir. Nothing more than a pest.

A frog appears from nowhere and starts talking.

A player that's been turned into a chicken